British hard rock group Inglorious are due to release a cover album including tracks by female artists they admire. The record will be called “Heroine” and will be out on September 10 by Frontiers Music srl. This is the official video for the track “Midnight Sky” by Miley Cyrus, which was initially released during summer 2020 and is included on her album “Plastic Hearts”. 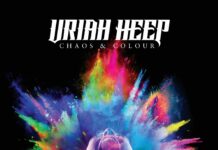