After three classic melodic death albums Finnish masters of melancholy Insomnium introduced clean vocals for the first time on Across The Dark (2009). The album was accompanied by a somewhat softer sound that they evolved further on their previous album One For Sorrow (2011). An album that was revered by many, but too soft for some. I am happy to say that Insomnium has succeeded in combining both old and new on their sixth masterpiece Shadows of A Dying Sun.

“The Primeval Dark” shows a similar simple start like One For Sorrow. Again with minimal lyrics, but a more aggressive touch than One for Sorrow’s opener “Inertia”. There is a smooth transition to the second track “While we Sleep”, which was the first official video for the album. Guitar player Ville Friman has taken his clean vocals to a new level on this album. New guitar player Markus Vanhala (Omnium Gatherum) immediately leaves his business card with a beautiful solo right after the soft spoken part “We need to slow down…”. That is what I call ‘spot on’. I must mention that Vanhala delivered an amazing melodic death album ‘Beyond’ with Omnium Gatherum last year, so I was very curious what he would bring to Insomnium. He had a big contribution to “Revelation”, which bursts open on all layers after a softer intro. Drummer Markus Hirvonen pounds away harder than ever before and Niilo Sevänen shows the rich dark color of his voice, whether it’s through spoken words or deep growls.

“Black Heart Rebellion” demonstrates this album’s crystal clear production quality with the guitars sounding razor sharp and clear, the rhythm section hammering relentlessly in the background and Sevänen barking away on top of it all. Those who had claimed that Insomnium has become too soft should definitely check in again with this track. The guitars in “Lose the Night” remind me a lot of the beginning riffs of the song “One for Sorrow”, but other than that the reference with the previous album stops. On “Collapsing Words” the band goes back more to their old sound with only shorter moments of atmospheric melancholy.  “The River” is one of my favorite songs on the new album, mainly because it features everything I love about Insomnium. Beside the in-your-face outbursts by Sevänen, captivating cleans and melodic aggression common in the genre, it shows Insomnium’s strength in writing lyrics:

Old is my moon – Circle is complete Long has been the way – The day is giving in The dusk is thickening, cold engulfs the shore I hear across the stream as Charon blows the horn One more summer I ask for, I crave One more autumn just to finish my song

We were introduced to “Ephemeral” already through the EP release, however, the album version has gone through some slight changes. The album builds towards its end with “The Promethean Song”. The acoustic elements remind strongly of the three acoustic tracks released on the Ephemeral EP and on this album’s bonus CD. Of all the songs on the album this one would fit best with the style One For Sorrow, so fans who adored that album will love this track. The title track “Shadows of the Dying Sun” lets you enjoy their typical sound until the album fades out and you slowly return to the light…

The evolutions on this album are not big and changes are very subtle. Rather, Insomnium seems to dig deeper and purify their signature sound even further. Markus Vanhala has immediately shown he fits Insomnium perfectly and brings something new to the table, while still sounding 100% Insomnium. The band has delivered yet another melancholic masterpiece. While some might argue this album is too much of an Across The Dark III, I am not bored or disappointed at all. As long as Insomnium keeps delivering songs of this level I will buy it and I will put it on repeat. 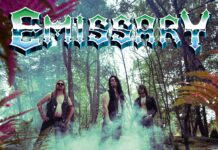