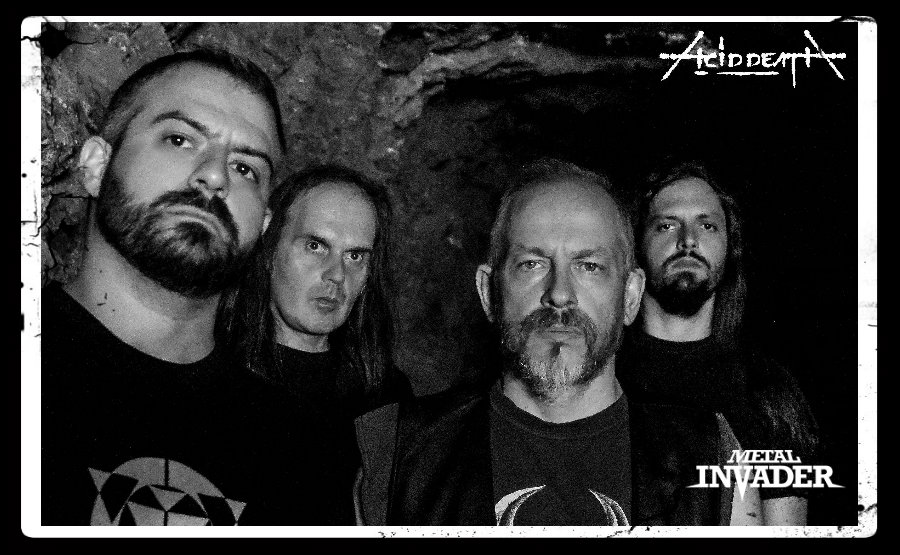 Welcome, glad to hear from you once again. On the occasion of the last “Primal Energies”, whose hearing intrigued me, I have to ask about its production process. How you started and where you ended up?

– Welcome back! Primal Energies is out of March 15th, and from what we’ve heard, it’s the best work we’ve put out thus far. The preparation and creation process of course starts early, quite early. Practically the composition of the material started in the summer of 2016, while we were arranging the next live performances, we had the re-releases of the first albums, we generally worked under pressure having many projects open. We arrive in April 2018 where we have completed the pre-production and we’re getting ready to enter the studio. From the beginning our material sounded more melodic, something that we left to roll, as well as the fact that for the first time there were elements that had never appeared in the music but also in the lyrics of the band. Production was completed in January 2019 after 3 different processing stages in 3 different studios with the corresponding human resources behind each process.

I guess the synthesis process was easier than in the past, all the more so if one considers the whole of your previous work, you had enough solid ground to press on about?

– No, not at all! It was much harder than the past, practically Primal Energies was an album that made it difficult for us! This had to do purely with the texture of the material as well as the individual elements that it included. For the first time we found ourselves having the album before we even entered the studio ready in pre-production, which we worked alongside the composition. The individual new elements had to be connected beautifully without altering the result, without losing identity. This was especially the hardest of all.

The collaboration with Tommy Vetterli, rightly, paid off, having the album a production that highlights the virtues of the band to the fullest. Tell us about it…

– With Tommy the first contact regarding the issue of production took place in 2016 on the Italian tour we had with CORONER. He had seen us live and after the conversation we had said to us “guys first I want to hear the material and then we will get into details”. So in April 2018 he got his hands on the pre-production. He, therefore, that it is material that could work, so we went into the details of what and how it should be done. We prepared everything here and gave it straight into his hands at the 2018 Over the Wall festival where CORONER were headliners and the process started. His suggestions and tips worked and the sound given to the album by the sound engineer of CORONER, Martin Zeller, who took over mixing/mastering with Tommy Vetterli’s instructions really emerged the tracks and made this record to be the best we have done so far.

I insist on the composition/production story due to the particular mastery in the structure of the pieces, meaning how they seem to tie one to the other, whilst constituting a story each individually. From one/the idea to writing or is it scattered thoughts that got musically arrayed over time?

– Both scenarios are true. Scattered thoughts tied to specific structures as well as integrated ideas from beginning to end. In practice, we have not changed the way we work, but all this has been done on a completely professional basis, completely controlled at every step.

Having gotten a good taste before the release of the album, and after my recent re-listening of it, I find that I very much appreciated the second time much more for some reason I can’t identify. How would you comment on that, especially considering your musical orientation and your general approach in recent years?

-The truth is that Primal Energies is not an “easy” album, Meaning that you don’t discover everything at first contact, this is also fascinating because you discover what this album is slowly. After all, this is the main characteristic of our own identity and, on the other hand, this is our purpose. “Easy to digest” has no place here, and by extension commercial in the sense of “make a pack of pieces and go”. For us music is above all art and that is what we serve.

The path that you’ve strolled through the years, it’s rather lonely, inaccessible we would agree, however do you think you would sacrifice freedom for experimentation with the above view, or, more simply, the ability to reach the ears of more of the world that has a less formal relationship with the music?

– Let me put it this way. We can afford to go down such a lonely road. For ACID DEATH the freedom to experiment is their very nature. Given this, and given the fact that we never tried to make a living out of this, from our “art” that is, to stay in this “lonely” path is an one-way, which in fact is not a need but a choice. With our music we appeal to all without exception and each judges whether he is interested in watching us. It would be very easy procedural, technical and executive-wise to enter into a purely “commercial” music process and relationship with people, a supermarket type of relationship, but ACID DEATH for better or for worse was never like this…From the beginning.

After the publication of each work, how you go beyond the obvious of touring and listening to people’s comments?

– We always monitor and evaluate people’s opinion and get feedback from what is said and written. The/any views are clearly respected, but not directly accepted. We need any feedback to be examined by our “processor” and otherwise assimilated or rejected.

You consider processes such as the almost ritualistic listening of records, as was done with “Primal Energies” and done in general by the majority of the fans of our music, will disappear in the future? If so, the penniless musician for example, who sacrifices everything for rock ‘n’ roll and it is paid mainly in emotional/mental level by the music he or she produces, should cease to occupy a primary place in our consciousness as a role model?

– This one is about how people perceive it. There was a time when ritualistic listening was a rule, and now it’s an exception. But the “broke” musician continues to create because this is part of himself. Whether it’s a role model is a very long conversation… But it does offer something… Something that some people accept -a few or many doesn’t matter- and makes them a little happier.

In continuation to the previous question, how do you strife towards a more personal and therefore more special/unique touch to any project, and what is it that gives meaning to your involvement with the (specific) music still, in a time that seems to appreciate harder and/or is less interested in this particularly honest part of musical life?

– The truth is, this is also a challenge. A challenge to overcome obstacles and push through. The challenge is a key factor to keep you going. Love for whatever you work on is next.

I hope I didn’t drive you nuts, if you would like to add anything, in general and vaguely, and more specifically about what the future holds, now is your chance…Have a good one!

Thank you so much for supporting us all these years! We’ll see you out there on some stage!