One of Thessaloniki’s most interesting bands, Astrarot, having re-established their musical directions and aesthetics, two years after their last interview with Metal Invader. Charged by the band’s recent release show for their latest album and their upcoming show in Thessaloniki, we talked with Pantelis about their new record and their future plans, among other things.

Congratulations on your new album! Give us some insight about it. What are the main differences between this release and your previous one ‘Straight from Nowhere’?

Thank you! The main difference lies upon the composition of the two albums; ‘Straight From Nowhere’ was written entirely and exclusively by Nikos (guitars, vocals), while ‘We Can’t Win’ was written by the both of us. The production of the album was handled by me during the winter of 2017 and the album was released by Straight From The Heart Records.

Do you feel you’ve evolved in this second album? Is there room for experimentation in your genre?

Yes, of course. The new album was a change of route for Astrarot, a new beginning if you wish, especially because our lineup and tastes have changed a bit. Many of our favorite bands have based their career upon experimentation; Ministry, Slipknot, Soulfly, even Judas Priest! So, yeah, I believe that despite the genre you’ve chosen to serve, experimentation is the key for your development.

What’s the feedback you’re getting for your album by the Press?

We’ve come across both positive and strict reviews for the album, something that’s always interesting because you see how your work is being translated by other people. Our crowd was essentially created by this album and we see that’s growing in numbers day by day, either in our city with the things we do, or in Instagram and other social media as far as the rest of the world is concerned.

Since the album was released in summer and some time has past, enough to reflect on it, what would you change or do different in ‘We Can’t Win’?

I don’t think I’d change anything. One thing I can tell you for sure is that we now do some things better than before, nonetheless I don’t like going back on things of the past. The final result was everything we could do and what we’ve learnt in the process will manifest in our next release.

Does “We Can’t Win” have a concept linking all the songs included in the album?

Generally, yes. The album was made after a dark and inert period for Astrarot, hence the title ‘We Can not Win’, so we made a collection of all our troubles and flushed them out to exorcise our misfortune, if you wish.

Lyrically speaking, what is the main source of inspiration?

Our everyday lives I would say, the problems, the circumstances, the human relations. Personally, it always seemed easier for me to write about something that happened to me than anything else.

At this time, the best albums of the year are featured in all the world’s music magazines. Which albums would you put on this list for 2017?

While She Sleeps – You Are We

Thy Art Is Murder – Dear Desolation

It’s no secret that the Greek scene has rocketed in recent years and rightfully we are seeing more and more bands popping up in top ten lists international and domestic magazines and zines. But, are there so many good Greek bands out there in the end?

We have always had bands with prospects in Greece, the point was that many of them didn’t make the right moves or didn’t believe enough in their work to make the next step. The domestic mentality does not inspire much; that’s the truth. Now I see much more conscious moves from local bands that are logical to yield and in the long run to rocket an artist to universal standards.

On January 27th you will join Exarsis and Serpent Lord for a live gig at Silver Dollar in Thessaloniki and then in Athens with Demolition Train and Violent Definition – in addition to Exarsis. What to expect from your appearances? Do you have other concerts planned?

Judging by the last time I saw some of these bands live, I would say that this upcoming gig will be explosive! We have prepared some beautiful surprises that will be announced in the near future.

Recently, your drummer Kostas broke three of his fingers if I’m not mistaken. However, no one has replaced him, heactually playedas if nothing happened at your last live gig. Where does all this energy come from? What would you say is the main feature / motive of Astrarot?

Yesthis actually happened. When we learned about his accident we freaked out, but everything went well. What I most appreciate in our band is that there are no compromises. When Astrarot do something you know it will be done right, as large or small as it may be.

Your recent release show that took place at Eightball Live Stage was recorded. Should we wait for a DVD release or some other media release? How did you make this decision?

This was another derivative of our ambition. We thought that at a time when the albumsare recorded in a very controlled environment, it’s a bold move to record a live album. It’s also a way to bring Astrarot’s live experience to everyone’s ears and eyes. The concert will be released in full, but the date and format have not yet been discussed.

Thank you for this interview, more to come up close at Silver Dollar! The epilogue is yours!

We thank you as well, Elpida and George! Those of you who haven’t yet listened to ‘We Can’t Win’, you can find it on Astrarot’s Spotify https://open.spotify.com/album/2EGTEsU07U7RdovD482o9J. CDs and merch can be found here: http://astrarotofficial.bigcartel.com/ 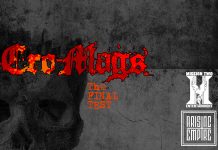 Cro-Mags: Listen or download for free their new song “The Final Test”