After a Septic Flesh gig we talked with Christos Antoniou to discuss about the band’s dreams, the financial crisis, the success of “Titan”, of course, and their next album.

The global acknowledgement has induced the need for extensive touring. What are the difficulties of being on the road for months?

When you are away from home for months some situations are difficult, even the smaller things seem huge. We live in some sort of “Big Brother” reality, closed in a tour bus with only way out our shows and some sightseeing at the countries we visit. Not that we are complaining, we consider ourselves to be lucky, but when the shows are numerous it take courage and strength to pull it through.

Is there a band that you’ve come closer with during all these tours?

With Moonspell! We have toured together many times and we are friends now, they are good lads, we understand each other, all of us originating from Mediterranean countries. Moonspell is the band we get together with best.

One year and a half has passed since the release of “Titan” and the critics weren’t all glorifying, as

they were with “Communion” και “The Great Mass”. Some of them found the material over the top chaotic. Is there something you believe you should have done differently?

I don’t agree with that, as “Titan” is our best selling album so far. Besides, it’s a matter of taste, it’s impossible for everyone to like us. I must say again that “Titan” is our most commercially successful album and the most well-received and that says it all. I think that it is clearly your opinion that it wasn’t unanimously praised.

Krimh is considered a permanent member of the band now. Is there a chance that he will be participating in the song-writing part, as he has proven in his personal band that he has skills?

Look, in SepticFlesh the main composers were three: Sotiris, my brother and myself. This was the basis all these years and I can’t see any reason why it should change. Fotis was helping as well, but the main inspiration was always coming from us three. The recipe is successful and I don’t see why we should change anything.

After 25 years as a band do you think that it’s time to release a live album? Besides it is agreed by all that your live performance has been perfected over the years.

It is not in our near future plans and we do not follow any trends. We do what we want and what our heart tells us. We’ll see… what can I say, I don’t want to rule anything out, but certainly at this time it is not in our plans. The new album is in our direct plans.

Once it came up… When will the new album be ready?

Look we’ve got a big two month long tour starting, in January and February, we’ve got some shows: in Athens in 6th March, then Israel, Malta. I believe that after March we will begin recording new material, which will be released in 2017, I suppose. I can’t be more precise, I think it will come out in the first half of 2017. Despite the financial crisis, popular bands give shows all the time. How can one explain this?

I really don’t know what the reason is for this. What I do know is that the attendance is lower in every band. We too in this Greek tour experienced this, which is a result of the economic crisis and imagine that we are not a band that loses money. Most of the shows don’t pay back their cost and that makes me wonder how can there be so many of them. The shows don’t leave any profit and I don’t know how soon this will turn around. My estimation is that we are at the center of the cyclone right now and I don’t see any resolution near. Unfortunately, I don’t think this will change any time soon.

I can see that, because we were expecting twice the people coming at the show to see you play…

From what I hear by other bands everyone is suffering from this decline in ticket sales. We’re in the middle of the crisis and no one can tell how long it will last. We’ll see, we’ll see…

The background of your songs with the orchestral parts could be used as the soundtrack of a movie. Has there ever been such a proposition?

All three of us are big fans of soundtracks. No proposition so far, but we are open to everything and we hope that this will happen one day, as our music has this certain cinematic scent, which could be perfect for a number of movies. We’re looking forward to whatever comes in the future…

25 year old career you have accomplished a lot. Have all your dreams and expectations -since you were a newfound band- been fulfilled?

We have accomplished a lot, but we still have a lot to give and there is always this “hunger” which urges you to try a little harder and give a little more and this “hunger” does work. I believe that we have a lot more to do. We follow our dream, with our inspiration we are trying to create much more.

Thank you a lot for your time, tonight’s show was great!

I thank you too, though I am a little dizzy by the tension of the show. It was a nice night. I wish to you all the best. 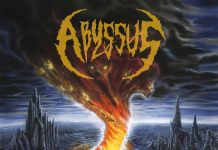