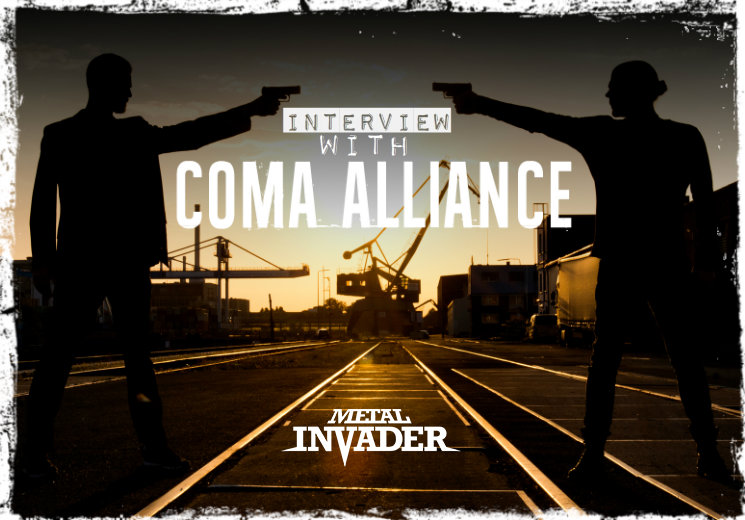 We’ve decided not to wake up from our coma yet, so to speak. That means, we can’t wait to get back to recording new songs and putting together the follow-up release for Weapon of Choice.

Would you mind telling us for how long you’ve known each other and how did you guys meet?

We’ve known each other since around 1995. How we’ve got in touch is a simple story: Torben wrote a letter to Adrian and Adrian called Torben back. 🙂

I know that Coma Alliance became “officially” a group in 2016, however, how did you decide to join forces?

It had been our longstanding dream to record an album together, in a constellation apart from our main bands and following new stylistic pathways. We were only waiting for a sufficient time slot. Luckily, this time slot popped up in 2018.

Tell us about “Weapon Of Choice”. How did this go and what feedback are you getting?

Giving life to Weapon of choice was a novel experience for both of us. We had to record 1 coherent album simultaneously in 2 different studios on 2 different systems, 450 km apart from each other. That meant countless night shifts on the phone, 26 billion instant messages and a lot of uploading/downloading. Nevertheless, our artistic exchange turned out to be extremely intense, and the feeling of belonging absolutely dominated the production. Besides, our production partners Daniel Myer and Gregor Beyerle were an indispensable resource for the sound character of the songs. The feedback we received was very rewarding. There was a high level of expectation towards the album. We were almost surprised how well the concept resonated with the audience and how open-minded people proved to be even towards rather unfamiliar elements in the music.

You have visited Greece again but seperately, under the signs of Diorama and Diary of Dreams respectively. What did you think of goth/electro communities here?

The Greek wave electro scene is alive and kicking. There is always something to learn and to be inspired by, every time we come around.

Athens especially, have been particularly fond of darkwave/synthwave music. But, what are your expectations on Thessaloniki’s show?

We’ve already played in Thessaloniki with DoD and Diorama, so the territory isn’t completely new. The key question is which city will win the unofficial and yet to be launched Coma Alliance Ouzo contest. The race is still very much open.

What is due for Coma Alliance as a team, now that you took the project a step further and started touring more together?

Delivering a worthy continuation. It’s only the details that need to be talked about. 🙂

What are your weapons of choice?

What kind of stage in the world you think would be ideal for a Coma Alliance show?

Our regular stage concept is rather atmospheric, emotional and moody. It fits very well into old theater environments, so any location that has the old theater looks is a good starting point.

What should we expect from a Coma Alliance show?

In this youtube age we’re living in, a rough imagination of what can be expected is somewhat easily accessible. But then again, each concert writes its own magical story and the Greek audience will surely contribute to a wild ride.

Thanks and see you on one of the two stages in Greece, probably!