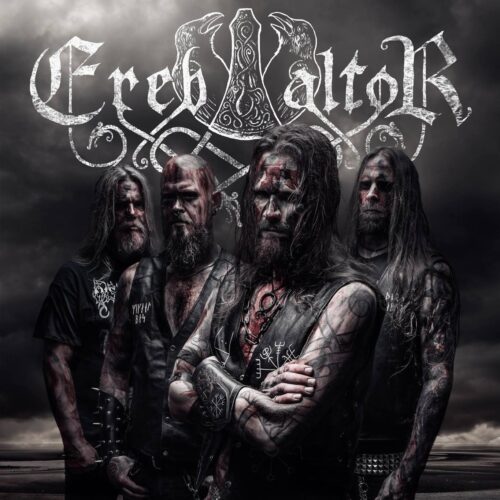 This year Ereb Altor released their eighth full-length album entitled “Vargtimman” and also are visiting our country on Demons Gate Festival along with Tiamat, Draconian, Isole, King Goat, Ophis, Memory Garden, and Sorrows Path plus an addition show in Larissa the very next day. On this 2 special occasions, we got in touch with the band who willingly answered our questions.

How does it feel like returning in Greece after a few years? Any particular fond memories you have from the Hellenic audiences?

It feels great, it’s been far too long since last time. We have always had a great time in Greece and I like the dedication from the Greek fans. I still remember the first time we went to Greece; I think it was 2009 or something when we played at Up the Hammers in Athens. I liked that festival and the lineup. I also do remember tear gas and riots at the hotel area from that time, an odd experience.

This year you released a new album, called “Vargtimman”. Would you like to discuss the concept a bit with us this time?

It’s not a concept album like a long story throughout the whole album athough all songs have a connection to our inheritance in Scandinavia, dealing with myths, legends or historical events in one way or another. We dealed with the black death, the witch-hunting during the 1600´s among other topics and the title track Vargtimman which is an old Swedish expression. It’s the hour just before dawn, the hour when most people dies and the spritual forces are the strongest. It might be a time to reflect over you past life before you die. The image on the cover is where death in human form takes an old man on his last journey to the land of the dead.

What makes this album different, from it’s predecessor, “Jartecken”?

I think Vargtimman has more in common with Ulfven rather than Järtecken. Still Vargtimman has a much darker side than Ulfven in my opinion. It’s no secret that the epic side is closer to my heart than the blackened style but still I do enjoy to try to combine those sides and Vargtimman is the album where I think we succeeded to deliver both styles in one unit in a way that we never done before. I never really know what next album will lean towards musically but I always try to explore some new areas with every release to evolve. On Vargtimman we used Hammond organs for the first time and we also expanded the use of disharmonic elements. The production is better and more suitable on Vargtimman and Tord did a great job in finding the right and organic sound. There are no sound replacements on the drums for instance, it’s all acoustic and I like the more acoustic sound rather than the modern kind of plastic sound.

When it comes to live performances, for those who have not seen you live yet, would you say that you try to attract the same atmosphere from the albums to the stage, or do you prefer it to be a rather intense, aggressive experience?

I often hear that our live shows are more intense and more heart filled compared to the studio recordings, as it should be I might add. In a live environment you also have the visual effect and we always try to do everything 110%. Still the atmosphere in the Ereb Altor sound is a very important ingredient and we try to capture this on stage as well with choirs and some backing tracks to build things up.

You are about to perform in Greece next to some legandary acts, such as Tiamat and Draconian. What are your expectations from that night?

It’s a very nice lineup and we are looking forward sharing the stage with these acts. We have played with both Draconian, Memory Garden and Tiamat before and it will be nice to see them again. But in the end my focus is on making our shows (Ereb Altor & Isole) as good as possible and the rest is just a bonus.

Since the festival was announced back in 2019 but got postponed several times before the pandemic struck our world, and also since that you now have a new album to roll with, what should we expect from you that evening?

Naturally the focus will be on our newest release which we are promoting at the moment. You can expect songs from our back catalogue as well of course especially from Järtecken since that album got injured from the pandemic. We didn’t really get the chance to promote Järtecken properly, we “only” did a European tour on that album but most festivals we had booked got postponed or cancelled.

Speaking of the pandemic, on what level was Ereb Altor affected by Covid 19 as a musicians’ level, as well individually for each one of you?

Well, a lot of shit went down the drain as for many other bands, musicians, promoters, clubs, sound engineers etcetera. Covid 19 did a lot of damage on the scene as whole and we had two very dull years. As most live shows got cancelled, I started to work more in the studio instead creating new music for Ereb Altor and the result is Vargtimman. On a personal level I believe you have to find some new things to do that can fill the void somehow. I started to do a lot hiking in different parts of Sweden during the pandemic and it was soothing for my soul and my needs and filled with me new energy and inspiration. Even after the pandemic I continued to do my hiking trips and this summer I went to the far north parts of Sweden for the first time since my child hood to explore the mountains and wastelands up there. I went to Kebnekajse, the highest mountain is Sweden for instance. I like the simplicity about the back to basic style, living in a tent in a middle of nowhere without roads, traffic and people.

What are you mostly looking forward to, upon visiting Greece?

To meet old and new fans and friends of course. And to be on stage since that’s the place where I feel alive the most. I am confident that we will have a great time and I hope many of the Greek metal fans will share this time with us!