It’s been a few respectful months since the release of “Welcome to Hel” and I believe that it has been warmly welcomed by people. Are you satisfied by the feedback?

Yes, the feedback has been great from both fans and critics alike, so that’s satisfying. I wish we would be able to take the album on tour right after its release, but things went better than expected considering the circumstances.

Considering that artists are never completely satisfied with what they pulled out and always wish to go back and change even slight details, is there anything would you change today on the album?

Yes, it’s typical that you think of small details and elements after it’s too late, but that’s normal. You just learn from your “mistakes” and keep those things in mind for next time. That being said I also believe that you just do the best you can at the time and stay satisfied with that. I don’t spend my time regretting things.

What is your favorite track off that album and why?

My favorite track is Helgrinda, I really like the melody, flow and feel of that particular song and has a lot of elements that I feel proud of. I also play the organ on it which is fun to do.

How would you introduce HJELVIK to the world? When this idea did come to mind and how did it come to life?

It came to mind shortly after I left my old band Kvelertak and started writing music. I always knew I would do something else besides that band, but didn’t know exactly what and when. It became pretty clear to me once I had some time to decompress and started working on things. The first song I wrote was Kveldulv and that’s when I knew I would write a whole album. Luckily I have a supportive wife who’s conveniently also my manager so she helped me facilitate everything, like negotiating record deals, etc. etc., while I could stay busy working on music and lyrics.

Last week you unleashed a brand-new single called ‘Synkverving’ that features a guest appearance by Lars Nedland from WHITE VOID and BORKNAGAR. How did this collaboration born?

Synkverving was a song that was recorded during the Welcome to Hel sessions. It didn’t quite fit the album in terms of length and feel, so I left it off.  Revisiting it I knew it needed something extra so I thought Lars would be a perfect match for the song with his clean vocals and organ playing skills. It was just what the song needed so I’m really happy I didn’t put it out earlier.

Are you ready to return with your second full-length album?

Yes, it’s still too early to talk about, but things are definitely cooking!

What should we expect from your sophomore album?

It will be more evil, heavy and epic. People won’t see it coming!

Comparing the album with your previous releases in Kvelertak, what has changed and what has remained the same for you? Where would you like your listener to pay more attention to?

I feel like I’m doing the same thing as I did in Kvelertak, only now I’ve added writing music to the list of things that I do. I will say that HJELVIK is more firmly rooted in the metal world though compared to my former band.

The most characteristic element of HJELVIK is the fact that you mixed different genres in your music, making the final result very unique. Did you consciously move forward like this or did it happen unconsciously due to your musical preferences?

I’m not concerned with genres when I write music, I am inspired by the music that I like which is everything from 70’s rock to black metal so it’s natural to have elements and inspiration find their way into my music. It happens organically, if I like the music and think it’s the right vehicle for my voice and lyrics then I don’t think twice about going forward with it.

By the way, since the entire world was on quarantine until November, would you say that you took the best out of this time at home for the band or did you take some time to relax?

I took some time to relax at the start of the whole thing, but most of the time has been spent writing music and preparing for live shows, production and getting out on the road.

What will the next steps for HJELVIK be? Any chance to see you live? Do you have something in mind?

Next summer HJELVIK will be performing festivals and we’re always working on booking more. So far we have Tons of Rock in Oslo, Hellfest in France and Rock Imperium in Spain. I can’t wait, it will be spectacular!

Thank you very much for your time! The closing is yours…

Thank you Penny! Thank you to my devoted Greek fans for your support of HJELVIK by buying merch and the Welcome to Hel LP/CD on www.HJELVIKmetal.com and listen loud!   I can’t wait to make it back to Greece and see you tear it up in the pit, skål! 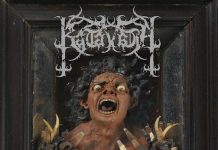 Katavasia – Invoking the Spirit of Doom