2021 marks eight years since the day you picked up the microphone for Exarsis for the very first time. What do you remember from the early days as a new member of the band?

“The more that things change, the more they stay the same” (Rush “Circumstances”). During these 8 years a lot has changed, the band has been through two periods of internal crisis, but nevertheless remained active, creative and faithful to what it stands for, artistically. The summer of 2013 was a transitional period and my joining Exarsis ended up after a series of random events. If one of them was to change, I wouldn’t probably be a member of the group today. We had a lot of things to solve collectively and individually; we had already booked our first European tour (early 2014 with Suicidal Angels, Fueled by Fire and Lost Society), while there was a brand where most of us didn’t even know each other personally. We had a lot of work ahead of us. I had to change my entire lifestyle, focus and get a job, and in general, adapt to what a band with serious goals is looking for. From then until today the band has grown and we all grew up with it individually as well.

How was your first live, from your perspective? I imagine you will remember it if not forever, for quite some time!

Ιt was during January 2014 at the historic Stage club, Larissa, with “Genna Apo Kolo” (Birth from the ass) and Thorn Burial! I remember that even though we were well prepared for it, I was anxious about what would finally happen. When I was in this small room next to the stage and saw the other members of the band playing the first song of the set, this anxiety disappeared, and I think we did well! We remember a lot from this trip and the show, as well as from our second visit to the same place in 2018, when I unfortunately found out that it was closed down. We look forward to returning to another venue next time.

So “Sentenced To Life” ιτ ισ! A little backstory on the album name? What was the whole concept behind the album, in terms of the main themes?

The band has been called upon to deal with a number of strange situations during the recent years. One of them was the internet courts that were set up on the occasion of the cover of our previous album, “New War Order”. With that working as a push for us, we talked a lot in the new album about falsified trials, the freedom of speech, the “filtering” of your art by the receiver, while another large lyrical part of the album has to do with serious personal issues all of us struggle with, such as depression, the feeling of betrayal, the battle with our inner demons and suicidal tendencies. Things we are doomed to struggle with in the modern way of life. “Sentenced to Life”, therefore, fits perfectly with the 2 main lyrical themes of our new work.

How did the whole process of putting the puzzle of “Sentenced To Life” together go, given that the whole of 2020 was mostly a quarantine?

Look, in Exarsis we have been living our 2020 for quite some time now, considering that our best and tightest line-up started to slowly disintegrate from the middle of 2018 until we were left with only two people trying to find suitable collaborators with quite a difficulty, while at the same time we had an album to complete. This took time to get it right, hence it took us three years to release new material and not two. When the coronavirus broke out and the restrictive measures were in place, we were just before the end, there were only some unfinished vocals left, and that took us a few more months, plus last summer due to fatigue of my vocal cords I was banned from singing for a month. The album was completed with the help of our new drummer, Panagiotis, the help of our old teammate Christos Tsitsis in the lead guitar parts and solos, with some final touches by our new guitarist George. At the same time, the contribution of Michalis Karpathiou to D Studio, was something more than valuable and decisive once again.

Which track do you stand out most from “Sentenced To Life”, while I would also want to know which Exarsis track is your favorite at live shows.

Each song stands out in its own way, I would personally choose “Mouthtied” as my favorite. I had singled this one out from the first songwriting sessions and since then, I thought it would be our next video-clip, something that finally happened in collaboration with our friend Stefanos Pappas that gave us wonderful results. If I am allowed to a second choice, I woulr say “The Truth is No Defense” which I enjoyed singing in the studio and has some of my favorite moments in terms of performance. Now, for the live and the rehearsals aspect, I will choose a song from the time before I joined the band, “Surveillance Society”, which always works, under any circumstances, either for warm-up or for the pump-up.

If we could only keep the positive aspects of 2020, which records would you say that you couldn’t stop listening (regardless of the release year), as well as which live show you managed to see this year and you hold as one of the best ones you’ve ever seen?

For the concerts, at the moment I can hardly remember anything so strong – I don’t remember very well which ones I saw this year. I wish we saw Mercyful Fate, Helloween and Bauhaus, hopefully this will be fullfilled in 2021. As for records, I think too many, either new ones (Wytch Hazel “III: Pentecost”, Stygian Crown “Stygian Crown”, Bütcher “666 Goats Carry My Chariot”) or old ones (Bon Jovi “Keep the Faith”, Whitesnake “1987”, Celtic Frost “Monotheist”), I could write you titles and band names for hours. Music as a companion and medicine was mandatory during this bad year. Honestly, I think one of the few positives of 2020, was that we completed and released “Sentenced to Life” with such a warm welcome.

Like all bands, we look forward to meeting you all together and rehearsing, playing new material together and starting to come up with ideas for our next step. As for our part, we will prepare the best we can for the moment, and when the green light for the concerts will come on, the stage is the place where Exarsis feel most familiar. I hope everything goes well and at the end of ’21 we make our next European tour to promote “Sentenced to Life” properly. Until then, we look at its promotion with whatever means we have, while also contemplating for its vinyl version during the year…

For a proper ending, I leave you the opportunity to give your “wishes” for 2020 which is dead already.

Go to hell, nothing else. I wish all the best in ’21 for everyone. Many thanks to Metal Invader for the support. Happy New Year! 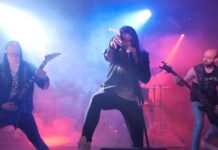 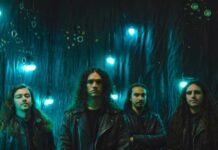