It has already been a year since you joined Lordi and everything’s got crazier than ever! How does that make you feel?

I feel good and I’m thankful to be part of this group! It’s been great to get familiar with the band members and all the people in Lordi group.

Let’s take things from the start; tell us a bit about your childhood, and how did you end up a musician?

I had quite normal and good childhood. I remember how me and my friend played Kiss already in daycare and we had wooden sticks as our guitars. I think that was my start as musician.

Which are your main influences that led you to take on the bass? Which was the very first album you ever got?

Me and my friends decided to start a band and bass was left when was my turn to choose! My first album was that recorded Kiss “Lick It Up” c-cassette I played in the daycare and a few years later I bought my very first LP which was Twisted Sisters Stay Hungry.

There’s a funny story about when you took the job as Hiisi, when the guys didn’t call you for more than a month to let you know that you’re in the band, according to what Mr. Lordi has told us! Can you tell us your perspective?

Hahaha! It was horrible! Like a child waiting Santa to come and tell you have you been kind or not.

Before you joined the band, how familiar were you with Lordi, apart from the fact that they won Eurovision in 2006?

I knew the band but not their music that well. Hits of course. Since joining the band, I get to know Lordis old production and I found myself liking it a lot. Nowadays I’m Lordi fan! I knew Mr Mana before joining the group.

How did you feel when you first entered the stage with Lordi back in Helsinki last year? How hard was it to play under this armor?

It was so cool to start my Lordi career here in Finland and Helsinki Ice-hockey hall!!! I was well prepared for the gig, so I knew everything is going to be well, or at least I hoped so. And everything went well! I’d practiced with my costume on a few times before, so I knew how it feels. Still it was quite hard to play a real gig with the armor.

Even though the “Killectour” got short-cut due to the coronavirus, you played a few nice shows, with fully packed venues. Can you tell us a funny story about the road? Who is the most annoying one and who’s the least party one?

It was so great to meet all the fans!!! That and shows were the best part of the tour of course. I enjoyed every moment of it! You know, what happens on the tour, stays on tour…

What is your favorite bandmate so far?

I love them all. They are all totally different people but still quite similar in some point. I love our Killectour crew too. They are the best people to work with!

What have you been listening to lately? Any new releases that got your ears?

How has quarantine been like for you especially after you went back from after a European tour with a band like Lordi?

At first it was quite okay to take a little break and just stay at home. But soon I started to miss gigs and shows and I still miss performing a lot.

We know that Lordi have been preparing something huge for 2021, can you give us a few hints?

Something huge is coming…;)

What should we expect for “Killectour ” if it’s really happening soon?

I really hope that we can continue Killectour as soon as possible, but nobody knows what’s going to happen. We are ready to continue when the time is right!

Anything you would like to say to the Lordi fans that have been reading us?

Keep on rocking and take it Hiisi! 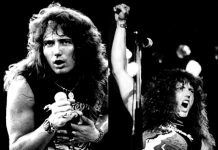