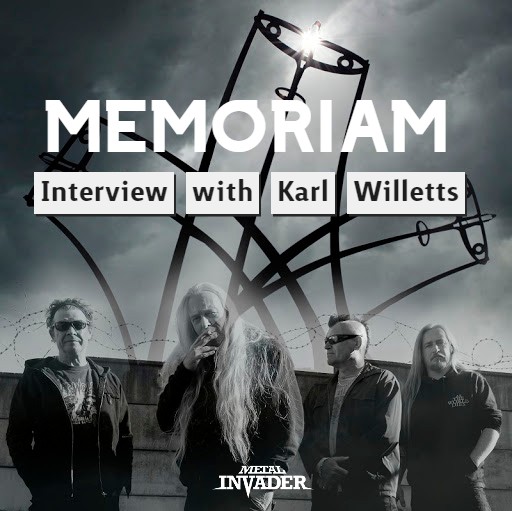 Hello Karl, greetings from Greece and Metal Invader. It’s a pleasure talking to you again, Karl. Well, this seems to me like a brand new start for Memoriam … New album, new record label. First of all, could you tell us about why and how came and you changed label?

We came to the end of our contract with Nuclear Blast, they had a big take over by a corporate digital marketing company “Believe Digital”. As a result, half of the staff left. The people that worked us with left to start a new label “Reaper Entertainment”. So for us it was a logical step tο move with them to support their new enterprise. It has worked out really well for us, we have a better promotional team behind us and we are now a larger priority for the label which is great.

There’s also new drummer for Memoriam. Enlighten us a bit about your new bandmate, Spikey T. Smith (Sacrilege, The Damned, Killing Joke and English Dogs). He surely has a strong bio … apart from that where there any specific reasons that the band and Andy took different paths?

Andy left as he has some issues with his shoulder and could not commit to recording the new album, he is ok and recovering and getting stronger. But the decision was made to move forward and recruit a new drummer, that where Spike comes into the band. Andy is still keeping busy with his band Darkened and some other projects, I hope at some point in the future our paths will cross again.

As “To The End” is already more than a month on the stores, what’s the feedback you get from your fans and the music press? Tell us more about the writing procedure on this one.

The feedback from the album from the press and fans has been excellent, the album charted in the national network charts in Germany at number 9 which is incredible for music of this genre. The feedback received is definitely the best we have had so far.

The main difference with the recording process for this album is that we had a lot more time available to prepare for it as we have not been able to do any shows since March 2020. This gave us little option but to concentrate our time on getting the songs together before we went into the studio in October 2020. Those 6 months on concentrated effort have really paid off in my opinion.

“To the end” is your 4th album in less than 5 years. Don’t you ever worry that Memoriam will be burned out by keeping up to this speed? Does the enthusiasm and creativity run dry? Do you guys believe you still keep the flame that you‘ve got on back on Hellfire demos? Should we expect from you keeping up this one album per year pace?

There is no worry of that, we have loads of energy and creativity left in us, we are all attempting to achieve as much as we can while we have the physical and mental capacity to do us. We are already working on new material for the next album. We intend to keep this relentless pace rolling for as long as possible. At the moment with no gigs due to Covid and travel restrictions in place there is very little else for us to do.

When pandemic is over, do you believe that this whole situation will have brought us closer and made the community more unified?

Are there any plans for touring in order to promote “To the End” worldwide?

No, we do not do tours – that is not the plan for Memoriam, we normally keep busy by doing shows across Europe every other weekend – 3 or 4 shows a month and that is enough for us. We all have other responsibilities outside of the band and we enjoy doing it this way. It works for us. The idea of jumping on a tour bus and doing an extended tour of 6 – 8 weeks does not really have any attraction to us, it would probably kill us!!

Any fav songs from “To the End”?

I like them all in different ways but I am particularly fond of the Doom metal sound of “Each Step (One Closer to the Grave)” along with the massive epic sound of the closing track “As My Heart Grows Cold”.

There was recently a post on Facebook revealing you‘re working upon a new project of yours, along with Scott Fairfax. Could you tell us more about it?

Yeah, that’s coming together really well – we have already written one track for it, its just me and Scott, very synth based, very atmospheric and very different. We are looking at getting something released later on this year.

The cover art of the new album – also for the previous Requiem For Mankind, For The Fallen and The Silent Vigil – is stunning. What was the concept behind the artwork this time? How is to work with guys like Seagrave?

Having the album covers done by Dan Seagrave is incredible, we are huge admirers of his work over the past 30 years and his style is epic and fits our band really well. It is fantastic to be part of the creative process with Dan, seeing an idea or concept that you have in your head which you explain to him by email and watching that idea develop through initial sketches to more detailed panoramic views, the inked in outlines to the final album cover is amazing, we are proud to have him involved.

The floor is yours….

Thanks to Metal Invader for this interview, I would like to thank all our friends, followers, fans in Greece- We look forward to seeing you again soon.

Thank you again for your time and this interview! Take care!