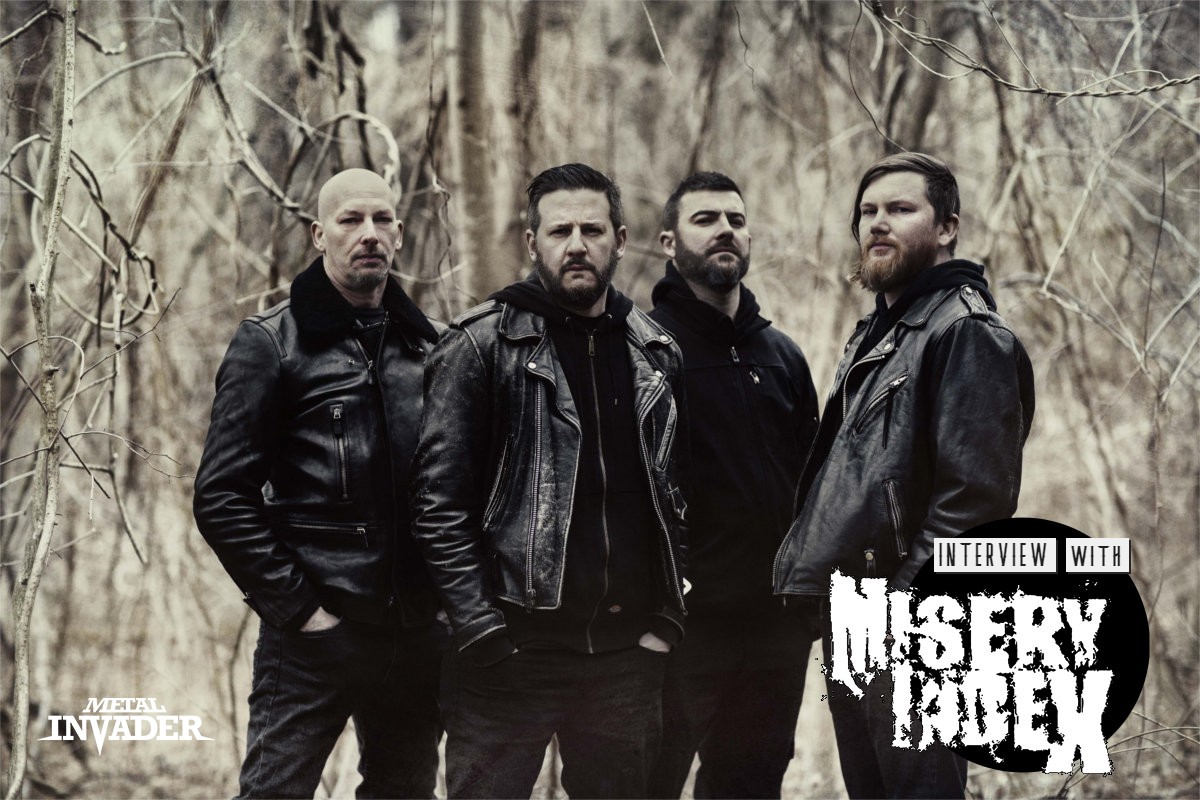 Hello and welcome to Metal Invader! Excited to have you with us! Is everybody alright? How are recent days treating you all?

Doing well thanks. We are still kicking, mostly vaccinated and ready to get back to the road. Recent days have been relatively quiet, but we are firing up the engines and have a new full length in the works, so plenty to (hopefully) look forward to in 2022, but then we’ve had hopes before things would get better, so we will see.

This whοle Covid pandemic has changed many aspects of everyone’s reality. How did Misery Index cope with all that? On what levels did the pandemic affect you?

Well like many others, we stayed inside a lot, and kept quiet. It was nice in some ways, as it kind of allowed me to focus more on getting other things done (e.g completed a degree) and spend more time with family. On the other it got old after a while and missed friends and social activities (fests etc.) But we got some new songs written and a new album is ready, so that came perhaps sooner than it would have.

As you’ve already stated your new album will be released next year. Care to give us any intel on that? Artworks, due dates?

Yeah, it’s got nine songs; some song titles include “Reciprocal Repulsion” and “Rites of Cruelty”. It’s also our debut for Century Media and its aimed to be out in May, if all goes well. We just finished the majority of the tracking and things are looking good. The artwork is not completed yet, but we are looking at doing something different this time around. I think people are gonna be pretty stoked on this one, a lot went into it…

What should we expect from your upcoming record? Where do you believe your listeners should focus their attention to?

Well at this stage, Misery Index has a kind of “sound” I think, and the songs are in the realm of that sound. I would say these tracks perhaps might be more at home with the approach we had on Heirs to Thievery if I had to give a sonic association, but we are always looking to add new stylistic touches and influences, so it’s never just ‘variation on a theme’ but more like an ‘actual progression within certain frameworks’ kind of thing. Listeners should follow their ears and if something draws them in and makes them feel something, we are happy.

Your lyrics have always been driven by the political and social, well, dystopia we’re experiencing. Is it safe to believe that will happen again with your upcoming album?

That is a safe assumption. There never ceases to be fodder for disgust and anger in the domain of social reality, and that is where we draw our lyrical inspiration, and what better do scream about than something that has real world implications? We also try to use a lot of imagery and metaphor, so it’s not all surface level analysis, it’s always about going deeper, looking at the bigger questions of where we are as a species, is it a good thing, and how might it be better?

A have a few questions about Anarchos Records; first of all, what urged you to form such a label and what were your goals upon forming?

Anarchos Records goes all the way back to the beginning of the band. When we did the first demo, we wanted to give it some kind of legitimacy by putting it out on our own imprint. So the demo became the “Overthrow EP” and the label we assigned it was Anarchos. Since then, we have used the imprint as a means of identifying our self-released albums and singles, EG the compilations “Pulling Out The Nails”(2010) and recent “Coffin Up the Nails” (2021). So it’s not an operational label in any sense, just an imprint for Misery Index self-releases.

Even though the label is yours and from where I’m standing owning a label can be liberating for a band, why did you continue releasing records through other labels such as Relapse, Nuclear Blast, Season of Mist and lately Century Media?

As a band, we always intended to work with a label, as we also have jobs and other things going on besides the band, so we have not the time nor the resources to properly self-release our albums. So in the traditional sense, the assistance and financing benefits of those labels helped us to grow and tur the world to an extent than might not have been possible has we went all alone these past years.

Misery Index has been around for two whole decades; comparing 2001 to 2021, what do you believe has changed since then and what has remained the same after all these years (in terms of both the band and the music industry as a whole)?

The biggest thing (as well all know) was the digitization of music and its dispersion onto online networks in the late 90s. Since then the platformization of media as harnessed music into new structures of economic accumulation, notably the streaming economy and the subsequent increased importance for labels and artists to make money from other ancillary practices (merchandize, live performance, licensing, etc) combined with other more unconventional practices like crowd funding in order to create a portfolio of micro-income streams (which still don’t add up to much for the majority of recording artists). For Misery Index, it was never completely a full time operation, we always had other non-musical activities happening, but we can see how tough it is to actually make money, especially in extreme metal, if you are not in the top 10% of bands which can headline and pack big rooms on their own.

Extending the previous question, what keeps you going after all these years? What excites you and urges you to keep going strong?

The music is always the driving force, the feeling you get when you come up with a new riff, the feeling on stage when people are enjoying what you play, holding your new album in tour hand when it first comes out…it’s all magical and intoxicating, and has been since I was 14 listening to my Iron Maiden records. I guess it’s the same passion anyone has for an occupation or an artistic endeavor, it just so happens ours is death metal.

From what I understand, the band’s lineup is a bit spread over different cities / countries. How do you make things work? What are the difficulties you face for things, like writing procedures?

Since 2012, we kind of split up and moved to different places and in my case, different countries (first Canada, now Finland). However, with the technologies available today to record at home and share the same files instantly online, it’s been relatively efficient to write music together and share it in the course of making a record. All of us contribute to the writing process, with each of us getting a few songs on every record, so we tent to first write individually then bring the rough song to the other guys for criticism and refinement. Its worked well, but I admit it’s certainly strange. Especially for someone like me who for all of the 90s and 00’s was used to banging out new riffs in the rehearsal space on a Friday night over some beers. It’s odd, but it’s much more economic as far as time, but of course the spontaneity of jamming out a new riff with just a guitarist and drummer is lost….

Always first and foremost what we would want to hear. We have always shared a more or less similar outlook on what kind of death metal like, and have a lot of the same influences. We all just like good riffs and good songs, and we make what we believe to be the music we would want to crank up up if we were driving down I-95 and in need of some good tunes.

I got the feeling that this new global crisis will lead people to use once again (extreme) music as an outlet for all that pressure and insecurity that lingers in the air. Do you think there’ll be an outburst of new music in the next months?

I hope so, and I have long had a theory about the connection between our material conditions (our social situation, its tensions and contradictions etc) and how art is expressed and channeled in reflecting and refracting those tensions and contradictions. To me this was the essence of the birth of extreme music in the 1980s in all its forms – the existential dread of the cold war, neoliberal economic policies and so forth. The 90s saw a decline in extreme music (but of course not a disappearance) and a rise in other forms of ‘alternative’ music, rave culture etc. But the pendulum swung again by the late 90s, and after 9/11 a new rise in metal and extreme music, which has been consistent since the Bush years until now. So in sum, yes, I see music being a proper outlet to these larger social forces that occur around us; the tensions related to Covid, employment or the environment (among many others) channel our collective fears and anger into expressive form.

What are your upcoming plans? Are you looking forward to start touring again? I think both the band and the fans need some gigs!

Definitely! We are starting in earnest next summer (2022), we have a bunch of festival visits planned, so if things work out and we can tour, then we will start with that. We also have a tentative headline tour planned (US) if all proceeds well with our album release in May. Fingers crossed.

What bands or artists can be found in your current playlist? Anything or anyone that has blown your mind lately?

Alright, that’s all from me; thank you for taking the time to answer everything! Any messages you’d like to direct to your fans via Metal Invader?

Thanks for the chat, all the best!