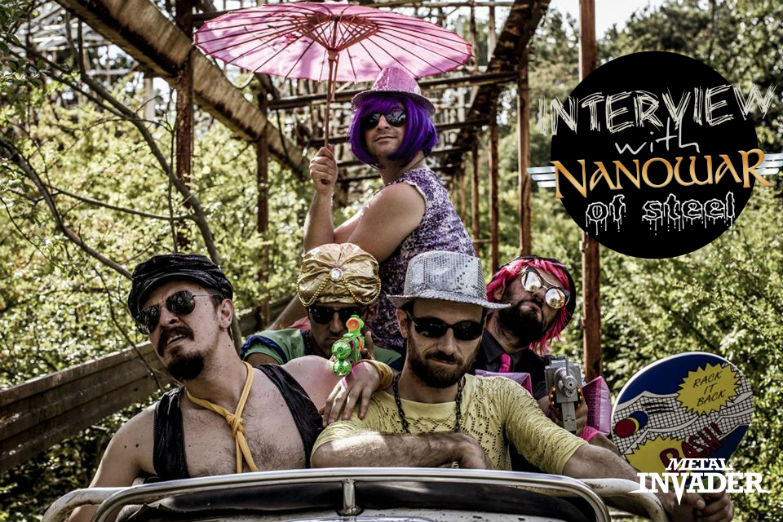 In light of the upcoming Nanowar* show in Athens on November 28, I had the wonderful opportunity to get the simultaneously most and least illuminating interview of my life from bassist Gattopanceri666 and sound effects connoisseur MrBaffo. Enjoy at your own responsibility:

*of Steel, don’t you forget, these fellas have had some serious legal disputes.

Hello guys! I’m really glad to be doing this interview. For the yet unsuspecting public, tell us what you guys are all about.

Gatto: We are a band of weirdos doing idiot stuff with dedication and seriousness’

MrBaffo: YOU SAY IT IS!

On a more serious note, you guys seem to have the recipe for blending metal and comedy figured out to an enviable degree. What is it about metal music that makes it work so well in this kind of context?

Gatto: I think it’s just the fact that metal bands take themselves too seriously very often to the point of ridicule and not many are taking the piss out of this true-serious-

I probably already know the answer to this one, but is there anything that’s too serious to joke about? Is there such a thing as going too far?

Gatto: There is of course, and that’s the direction we’re going! We haven’t gone too far yet and we need to explore this uncharted territory.

What is the typical process for writing a Nanowar song?

How do you guys feel about the term ‘serious music’? Is what you’re doing now ‘serious’? Would you like to do something different in the future?

MrBaffo: I love chocolate, but sometimes I want also Vanilla taste. Do you eat the same meal for the rest of your life? Malkavian speached.

Gatto: Well, we take very seriously what we do. The videos, the audio production, the arrangments, our costumes, Mr. Baffo’s whig – everything is dead serious, and there’s no reason to do something different in the future nor in the past.

In your opinion is doing comedy harder or easier compared to writing on other themes?

MrBaffo: It depends of your mood. One cow said to another cow: How is your mooooooooooood today?

Gatto: A serious answer – ON AVERAGE, it is much harder. You can have a look at the median metal lyrics and most of the times you do feel there’s not much research nor creativity there. Comedy can be outright stupid – and it sometimes is also for us, with very idiotic jokes, but we try to be as sophisticated and unpredictable as possible. Writing a song about Leroy Merlin and Black And Decker for example wasn’t easy at all!

How would you describe your live shows, for the uninitiated?

Gatto: It’s the embodiment of random acts of senseless idiocy

Thanks so much for the interview guys, on a final note tell the Metal Invader fans anything you’d like to sign off.

MrBaffo: Did someone said “Retsina”?

Gatto: Learning the arabic alphabet is easier than you think!