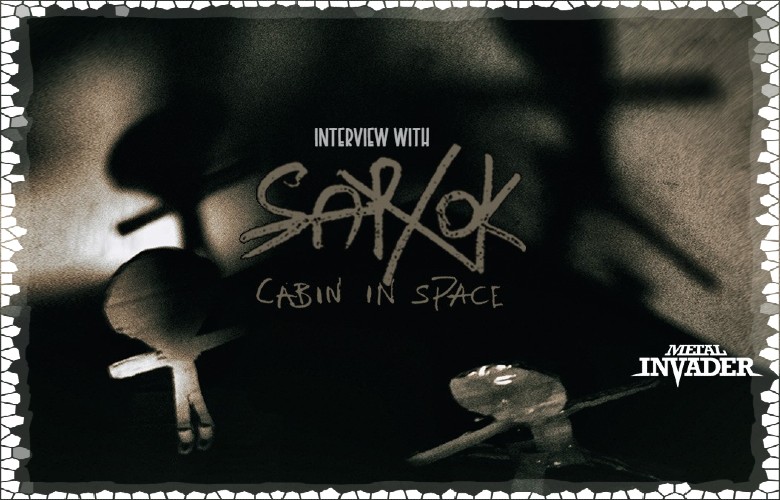 A band that cannot be placed in the metal genre, not even rock or pop, a band experimenting with natural sounds and as it seems, a band with much to say. I present to you Sarvok and the man behind this band, m.Sarvok. Let’s see what he has to say…

To begin and introduce Sarvok to the people, tell us a few words for the band. When was it created, what were the reasons behind the creation of such a project?

The need for creation is a worm in the brain, which has the need to feed, or else it destroys you from the inside.

The “Cabin in Space” EP, is the 1st release for Sarvok and it was released by Fucking Your Creation Records, a label owned by none other than Wrath. How did this collaboration took place?

This collaboration came up totally in random and it is a funny story. Wrath was thinking of creating a new project and he needed a drummer. I was not one, but due to lack of musician in the town where we live in, I thought I should give it a try and this is how we met. Of course this project didn’t come to life after all and it was expected since I am not a drummer, but we started working together.

I have to admit, that this EP is not something that we listen to that much as metalheads. Nevertheless, it has a certain atmosphere, a feeling, that is hard for me to not notice. What is the philosophy and the thoughts behind such a release?

To begin with, I should tell you that I have been through many music genres, which means that I listen to electronic music, ambient, metal, hip hop, experimental, Greek traditional music and that goes for every day. Between those genres, I am very selective, so I can find sounds and music that will “sculpt” me as a human being and as an artist. I am not looking for something to spend my free time and I believe that it shows in my music. You cannot label it with a certain genre. It is not even ambient.

Is there a certain pattern behind the song titles? I am sure that nothing is random in this EP.

Yes there are hidden messages in everything, as well as in the songs time lengths and the number that come out of them. Everything is a part of the whole, from the artwork, to the sounds, to the tape’s sound design. Even the wear of time plays a role in the whole experience.

Are you a part of other projects/bands? If yes and if you want to reveal it, since I suppose that the hidden identity is a part of the band’s character, what led you to something like “Cabin in Space”? The reason I am asking is that the bands that Wrath is releasing, even if not always metal, always have something to do with rock or punk regarding the band members.

We are working on a new project with Wrath, called Geometric Nictation of Lament Space (G.N.L.S.). At the moment, I am mixing our first album, “Conspiracy of Thoughts”.

Tell us about the riddle in the tape. Reading the press release, I saw that the correct answer, will be rewarded with a “key” for the next riddle.

There is a piece of music, which is a key for the the next riddle and will be released in the nexr album. It will be heard only if someone finds the solution. If not it will self-destruct and will never be in the open. The one who will find the answer can reveal it or it for himself/herself. Maybe someone already holds the key.

While listening to the EP, I tried to figure out the instruments used for the recordings. Tell us about the equipment you used, where was it recorded and in general give us more technical info about it.

Right now, I cannot even remember. The whole scene and situation in which the music was created, was pretty surreal. For example, I might have used a guitar but played with a bow and in the end it would sound like a cello or something completely different. For sure, there is guitar, bass, a metallophone and various recordings by me out in the nature.

Do you intend to play your music live if and when concerts are allowed? In such case, do you believe that it could be easy to do so?

It depends on the album. I might think about it but not for now. Sarvok are a studio creation.

From what I understand via the press release, a new EP or album is already under thought. Will it be inside the same concept with the use of “meditating” and natural sounds?

Yes and no, but I will give you this: The second EP will be more metal for sure, atmospheric and experimental but without loosing the ambient touch. There will be drums and a lot of distortion.

Is there an audience for Sarvok in Greece or are you focused on the scene abroad?

People in Greece but also abroad, is in need of a revolution. Not regarding music and art though. Those older than us have said “maybe music is a form of revolution”. But when you have a job and you struggle to get through each day, you don’t have the time and the strength for art which will sculpt and entertain you – you want to burst, you need something simple and maybe silly to keep you company, to pass your time until the next day and go to work again. This kind of life is pathetic.

A somewhat cliché question, how do you think that the whole Covid situation had an impact on music in general but also specifically you and your music?

More time and desolation. Perfect! Obviously all the collaborations and things to be done are staying behind, especially when you have to work with many people. So a cliché answer, it is for sure a crisis that is affecting us all.

Thank you for taking the time to answer my questions. The last words are yours!

Thank you for having me. The best are yet to come!