Good evening guys and welcome to Metal Invader. I hope you’re in a good mood. It’s been some time since your performance at Heartcore Fest Vol II, organized by your label, Straight From The Heart. Really, how did you see this year’s festival? What experiences did you get? What are your thoughts?

Good evening from us, as well!!! We are actually going through one of the nice phases in recent times. We have released our 3rd album, the reviews are positive so far and we have made some appearances we always wanted, but we did not have a chance like this one at the Principal club where this year’s Heartcore Fest was held. We’ve gained many and various experiences, so in the end of the day the sign is positive! We had the honor to share the stage with so many nice bands and to enjoy more in the Fest’s two days! One of the negatives we noticed was the lack of proper stage lights in most bands, something you don’t usually expect to happen, however that’s not a reason to judge negatively the festival. We are waiting for the 3rd Heartcore Fest to see what will happen.

Almost a week later you were in Larissa for the 6th Rock Music Festival. I imagine the experience was enjoyable there too. However, I want to focus on the fact that the festival was held outside the two major poles of Greece (like Athens – Thessaloniki). Do you see any support for local scenes and events taking place in the province? How do you see things?

We consider Larissa our second base and we have played in a lot of stages there and it’s always a delightful experience! What we have seen all the times we played ther is that the province is always surprising. Many times the support of the world is much more intense than the one in ] bigger cities and this is a fact. It’s logical, when thinking the amount of opportunities a citizen of Athens – Thessaloniki has seeing bands live and the amount of the same opportunities for those who live in Trikala, Karditsa etc. An organized event made by driven people with love toward the music, will have the appropriate support by the locals. We live in Karditsa, where we have SvenFest, a DIY stage with bands from all over the country, whose success is each year greater.

Keeping up with the general context of the previous question, Show Your Face is essentially based on Karditsa. Are there any objective difficulties that keep a band from the province behind? What are the positives and what are the negatives of the whole situation in your opinion?

If we were based in the city for so many years, we might have had some more opportunities and maybe we could get rid of the bats in the sea more easily, no one can know that. We try to see the positives and we do not use it as an excuse that holds us back, it is only positive that we live in the “heart” of the country which means equal distances for all the gigs in other cities!

On February 12, the third official release of Show Your Face “III” broke out. First of all, since it has been two months since the release, what feedback have you gotten from press and listeners? Are you happy with crowd’s feedback?

So far so good! There is general interest in the reviews we have received for the album but also in the presentation of the live which was exceptional and it was something that gave us some more power to push and continue to do what fills our hearts. Anyway, it’s not the salary we get at the end of the month that drives us, so when we see that something we are doing is actually successful, makes us happy.

Since it is not your first record, logic implies that usually things change in a band over time. What changes have Show Your Face gone through in this release? Where should the listener focus on?

Playing for almost 10 years in Show Your Face, the band has gone through many stages. We have definitely changed but probably the most reliable word would have been “evolved”! In the 3rd album we’ve made changes to our Line-up, a new member joined ,Kostas as a 2nd guitar with fresh ideas and new influences, which helped us move to focus on the band’s upgrade to a new level we always wanted and could because of the one guitar. In a nutshell, what you see in the 3rd album is actually heavier rhythmic tracks with more melodic vocals and everything is tied up with Kostas’ fresh leads!

What has changed in the synthetic procedure of Show Your Face in “III”? Did you follow a different direction in composing your tracks or writing your lyrics, or did you base on a beaten track, a process that had yielded the previous times for you?

As I said before, a member left and a new one came in, so some ways we have definitely changed. In the synthesis process we continue to write together which something that suits us, since everyone can put their own influences on the result. The difference on this album is that most of the lyrics are written by Kostas. In general, we are following a process that we do not intend to change.

Based on the titles and the lyrics of the tracks, one would say that Show Your Face are consumed by mostly negative feelings about human nature, perhaps the futility of reality, and anything like it. Is that the case? Where are your lyrical themes based on and what is the message you really want to convey?

Your description could actually be better than any other we could think of! This is also the good of our music in a general sense, everyone receives the messages he wants about what experiences he has gone through in his life. The message that we would like to spread to the world is what the band’s name says. Show your face and do not hide from anyone and anything.

What are the next Steps of Show Your Face? What does the future hold? Some music clip maybe, or some live shows inside / outside Greece?

Our plans are definitely some clips to promote the new tracks and definitely some live appearances. We hope that after the summer break we will be able to get to a mini-tour out of the Greek borders as it is something we have been hunting for years now. Nonetheless, we’ll continue out rehearsals and we have already begun to write new material! Stay tuned!

Thank you for your time, lads! I wish you the best for your future! 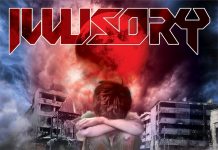