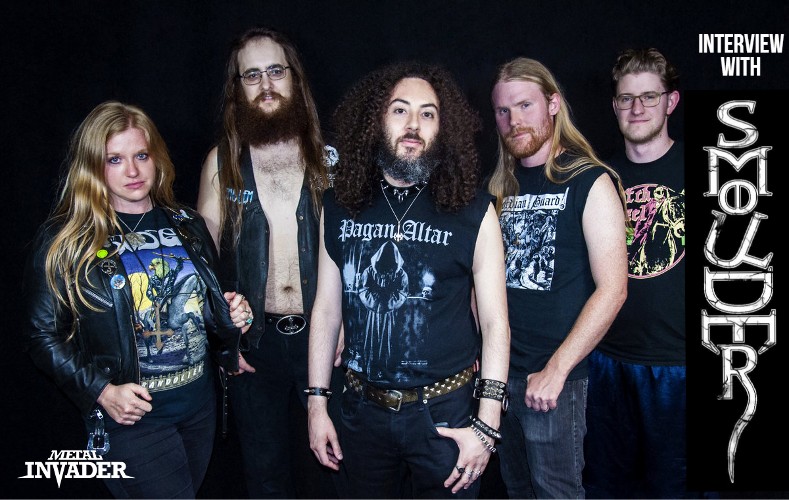 The band had a hard time last time in Athens, Greece with the sudden Covid outbreak and Smoulder cancelling every booked gig. Plus it wasn’t easy traveling back to Canada. How did you overcome March 2020 as a band? How does it feel that you finally arrived to play in Greece after two difficult years?

It was a lot to process. 2020 was an intense year for everyone worldwide (and so was 2021
and 2022 has been also, for different reasons). I don’t want to speak for every member of the band, but it personally took me several months, if not a full year, to emotionally process what had happened in Greece, and it was a huge financial blow to us as a young band to have self financed our own first tour, then to have it fall apart that way. In addition to singing for the band, I also manage it and deal with our finances, so I think I took that particularly personally and felt particularly devastated when it fell apart. Despite those issues, we were the lucky ones. None of us died, we got home safe, and our fans really rallied behind us to help mitigate that massive financial loss. After a few months when things started getting much, much worse and everyone started contracting it, we all just started to feel really lucky and really grateful. We collectively know many musicians, friends, colleagues and family who contracted Covid and died, or spent many, many months in the hospital battling it. We also know many musicians who lost a lot of money. Therefore, having our fans rally behind us via Bandcamp was a huge thing. We are exceptionally lucky. We spent many nights on video calls together, and after the dust settled, we realized that despite everything, we had not just survived, but actually recouped what could have been a massive financial disaster. To look back at that, to know we were okay, and to then be able to return to Greece with the support of our fans, feels pretty huge. We are extremely privileged and do not take it for granted.

Such an adventure, especially in addition to the entire pandemic situation that affected all of us to a certain extend, on most aspects on life, must have had a great impact to you both as musicians as a whole, as well as on a personal level. What has been the most “valuable” lesson for you after that?

I think everyone in the entire world has learned something about themselves in the wake of Covid. For me personally, it changed our entire lives. Vincent and I got married and moved to Europe in search of better healthcare and a higher quality of life because it really cemented down the idea that life is short and can end very abruptly. It taught me to let go of a lot, to spend less time on the things and people that aren’t deserving of my time, and to spend way more on the things and people that are. It also made me realize that being busy all the time didn’t make me happy. Our life together is much slower paced now, and it feels more fulfilling and happy than ever.

If one scrolls down your social media will see that you have been spending some time in Athens, free from Smoulder’s business. What did you enjoy mostly?

The people and the food. The history and the record stores. What a wonderful, beautiful, warm country. We love Greece and I have personally travelled there many times, so being able to return to it in such a way with Vincent was very special.

“Times…” is already an underground classic. Rumor has it that the sophomore LP is already recorded in Finland were the core of the band moved.

Indeed. As stated previously, we were very lucky that our fans rallied around us in the wake of Covid. We’ve already enjoyed a lot of support, and we were able to sell a lot records and merch during the past two years, which financed the recording of our second album. For that, we flew the entire North American version of the band to Finland and the five of us hunkered down in Soundwell Studio in Espoo. We had all been writing and rehearsing the finalized material for about two months straight prior to the recording session. It was a beautiful space, and we had around ten days to record there. We’ve been working on the record since ‘Times’ was released, and ended up finishing around 12 tracks. We whittled those down to the best seven, and had an incredible time capturing them in a studio. It was the longest our lineup has ever been able to spend together, and felt like such a huge treat, given what happened the last time we all tried to get in a single space. Plus, the fact that we all got to fulfill a lifelong dream and actually go into the studio together and have time to get best takes on great equipment. It was wonderful. Can’t recommend it enough.

Speaking of Finland, tell us the pros and cons as a functioning band about moving there and your decision to have a European version of Smoulder with a few Ranger members.

Finland has a lot of wonderful things going for it – the healthcare and social services including transit and infrastructure, are simply the best in the world. The comprehensive countrywide forest network is incredibly beautiful and completely free and open access to everyone. The metal scene here is very strong, although I absolutely despise the nazi apologistbehaviour of the black metal scene. That part is repugnant and representative of the spinelessness of the metal scene when it comes to nazi scum. As for Smoulder, it’s obviously changed some things. We are now in three countries instead of two. Our time zones are different, so it makes band meetings and writing a little lopsided. As for gigs in Europe, it obviously doesn’t make any amount of financial sense to try to fly three people from North America for one-off shows. Very few bands could make that work, and we’re not able to afford that. Given that the band has only played eight gigs so far, and on three out of those eight gigs we’ve had fill-in members as one of us wasn’t available, it just made sense to recruit some folks in Finland to play with us when the need strikes. We’re very old friends with the guys in Ranger/Emissary, they among our best friends here in Finland, so they were an obvious choice. Rehearsing with them has been a really good thing – prior to now, the band has maybe rehearsed with all five of us a total of ten times. Now we jam frequently. There’s a lot to be learned in a jam space, particularly for a clean singer. It’s helped me enormously learn exactly how hard to push myself so that I don’t strain my vocal cords.

A positive side effect of the pandemic, has been that we were blessed to witness some splendid releases, since musicians had more time to spend on the creative process. Which albums recently caught your attention (and your ears)?

There’s been a lot, although I’m not sure if all the releases I’ll refer to where written and recorded entirely during the pandemic. But this year, so far, my favourite releases are as follows:

You guys are up to the teeth into new stuff, so which bands you consider to be the “next big thing” emerging from the underground?

Usually, what I WANT to be “the next big thing” and what becomes the “next big thing” are
rarely the same. BUT, I do think that out of all the band’s I listed above, I strongly suspect that Emissary is going to explode, and deservedly so. They’ve got an amazing, unusual USPM meets speed metal meets hair metal unhinged sound that just kills. And they aren’t paying me to say that because we’re friends: we’ve been listening to their new demo since we moved to Finland almost a year ago and we were blown away the first time we heard it. Also, I can’t wait until everyone hears the new Ranger album. Holy shit, it absolutely smokes.

What shall we expect from Smoulder in Trikala? We read about two different shows, plus a DJ set by you, Sarah!

Yup. We’re doing our first ever acoustic set with a few special covers, and headlining on Friday night. Should be a blast! Also going to do some hiking and swimming.

To reverse the question, what do Smoulder expect from the Horns Up attendees?

I’m sure we’ll love the legendary Greek hospitality and food!

What is up to your calendar for the remaining time of 2022?

R&R. No more shows have been scheduled as of yet, but we’ve got a metric ton coming in 2023, as well as our second album. DOOM OVER THE WORLD! 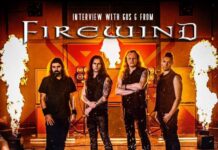