Second album in twenty years you say it not and enough. But to the problems that this band has passed to their beginning can only be synonymous to one genre… to what they play… Doom Metal!!! The title of the album represents absolutely the band and the genre. ‘Doom Philosophy’ welcomes you to the mourning darkness of Sorrows Path.

First of all congratulations for the album. Give us some details about the writing process of the album?
Thank you very much for your kind words! The album was recorded over a period of about six months at Fragile Studio in Athens with producer Vangelis Gialamas who did the mixing and the mastering, just as and in the previous album! Before we entered the studio we had prepared the eleven tracks making some prerecordings at the home studio of the band. Compared with the previous album “The Rough Path of Nihilism” the material was more recent, i.e. it didn’t contain very old tracks that were rehearsing by the band in the 90s. We are absolutely satisfied with the compositions, but of course there is always room for improvement which you can realize over time.

Give us a short track by track of the album?
First Beam of Darkness Into Light: Introduction to Tragedy
Tragedy: Tragedy and catharsis
A Dance with the Dead: Hubris
Brother of Life: Mortal Man
Everything can Change: Arrogance and Nemesis
A King with the Crown of Thorns: Pain and sanctity / purity
The Venus and The Moon: Upper and immortal ideals
Epoasis: Need for internal cleansing
Clouds Inside Me: Lost self-awareness
Darkness: Union with the Infinite
Damned (O) fish: Cursed fish or maybe serpent?

By now you have received, as I have seen, positive reviews from the press. What response do did you get from the fans not only here in Greece but abroad?
Fortunately, the reviews are very encouraging and even better in general than the previous album, which of course was again most of them very good! Of course there will be some who will prefer our previous work, but the percentages are very small compared to what usually applies to comparison between first and second record! We have no complaints and especially friends of the band are very excited and supportive to the band, which is very important since a band survives through the support of people who buy merchandise and going to concerts ….

For E. Rivera I don’t ask coz he’s an icon and featuring only is an honor for any band of the genre. How did come the collaboration with Snowy? What do you think he gave / offered to the music of SP and to the track. What other artist would you like to work with, or to participate in the album or to a future one?
Before we get into the studio to record the album we decided to reach out to some musicians who influenced us a lot to create the band in 1993 … The most pleasant was that they both were satisfied with our material, only listening our first video, so we were honored to feature Snowy Shaw on vocals of “Everything Can Change” and Edgar Rivera In the solo of “Tragedy”. Excellent professionals both of them and also we are absolutely satisfied with the tone that gave the tracks. What we learned beyond the music lessons and general behavior that always give you such experienced musicians, is and two are friendships and good contacts with two important people of our genre! Especially with Edgar, we’re like brothers now. Snowy beyond his big name known in all corners of the world, he gave and some more theatrical vocals, which were required to the track and of course we are used to offer in gothic and black projects that have participated from time to time! He chose by himself the track that would make his presence, among others, and really in the end his choice was proved to be very correct! There are many artists that we admire, but it does not mean that we would cooperate with the band! This is done under specific conditions and the decision depends on several factors, so we cannot know what the future holds. However, it is likely a guest appearance and in the next album.

The cover of the album title perfectly fit and connected with each other. The ‘Doom Philosophy’ of SP in what subject are looking for responses through their music and lyrics?
The lyrics and in this album follow our philosophy! Indicated in the philosophy of death. In a regenerated human being that realizes the finite boundaries and throw off it’s cheap and limited desires! The desire for power, for money and fame that led to losing its true self and be consumed in jealousy and competition. We emphasize that the only way is the true recognition and sense of human suffering (matter that had already been analyzed polymorphic in the previous album, but and earlier) to get the man in true communion with other people for the purpose of redemption.

Which song do you think represents the disc absolute the title of the album?
We cannot distinguish one song. All tracks, especially on this album have a specific purpose for their existence. This is generally our philosophy, that we do not want to weaken the power of the whole, for the grace of the unit

In which philosophical stream do you believe, you belong as a band (Nihilism …obviously…)?
It has strong basis. We are nihilists in the sense that you do not deposit in favor of a theory and we have no ideological tendencies usually lead to barren fanaticism! The Nihilism is a good start to look within yourself and find self-awareness. The more you know yourself, the better you will be and your life in general, but also with your fellow men.

Who will be identical philosopher for SP?
May our country gave birth to the greatest philosophers but without seeking identification with a particular philosopher, we would say that we admire some German philosophers strongly influenced by the ancient Greeks, of course. Nietzsche gives you a trigger to deal with yourself and the power hiding inside you, renouncing fatalism and Schopenhauer that helps you get out of your material body and not seek miserable metaphysical crutches, are definitely two great people we admire.

The music search in DP, is not strictly limited to the boundaries of doom. Will you expand this search and in the next album?
Our main goal, like every band was to create a personal style within the genre we move. Fortunately since the previous album, the positive reviews are focused and in the personality of the band that mixes some elements with doom… whether they belong to the heavy / power / prog genre or in more oriental and gothic tunes. In this album we think we settled into a more compact heavy / doom style which we will follow after it is our consolidated staff style. But we never know what the future holds for us and we walk step by step to total disaster, like everyone else, haha! Until we get there, we know that in the next album we will follow the same personal forms, but we will try to appear even better synthetically and musical.

There will be any gigs support for the album?
Already after our release party in Athens in early October launched a series of live shows in Greece. Few and selected performances that will culminate with our participation as a support band with the Germans Scanner at Kyttaro club. Later in 2015 we are planning some European gigs, that we hope to announce soon.

Is there future for doom, since the big bands either dissolved or are too late in making an album?
Surely the big bands of the so-called epic doom are late in general except Candlemass the great figure of Leif Edling guide them, but this is a general phenomenon. Many bands there are and a wealth of releases but accompanied to this plethora of similar quality. We are trapped by the technology that prevents us to look deeply and have a slower pace that is needed to mature and thrive Art and in general the feeling. But always there will be future, as there are people who feel, love and live for Art.

Since you are twenty years in Greek metal scene and you know it from the good side and from the inside out. What has not been improved at all in these twenty years?
The level of the music is much better on the past, but we still have a long road ahead of us. Especially should get rid of mimicry to foreign models that still afflict us, as well as to further improve our mentality. Definitely we go better in all areas, except perhaps the narrow-mindedness, prejudice, jealousy and the silly competition that still characterizes the average Greek.

American or European doom. What unique has offered each continent to the genre?
Certainly Europeans have a great tradition on their side. And when we say traditionally, we do not mean just music but overall culture in the long run. But even the Americans have a long tradition of rock and very considerable expertise. We would say that the result is a draw and each continent has brought important things in the genre, but overall to the rock music in the broadest sense.

Epistle No 81.
Thank you Giorgos for the very interesting questions, like and Metal Invader for hosting, and readers who support the band and provide the necessary oxygen to live. We hope we’re all fine and meet each other at otherl times in the future, happy to talk about for new releases. Doom rules eternally… 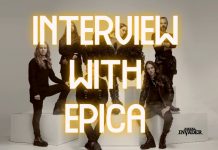 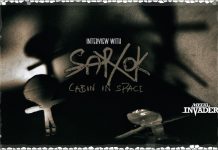