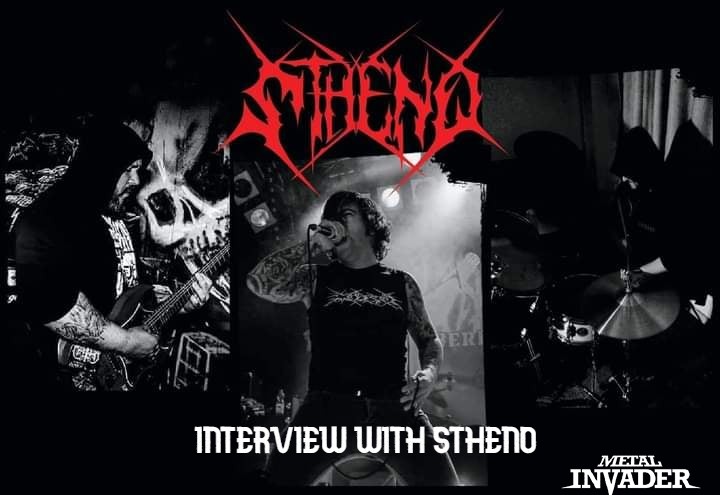 Good evening, Leonidas! It’s been a long time! What’s up?

Good evening to you too! It’s better to talk when you have something of substance to actually say.  I am in a very good phase despite all this paranoia we live in, finding ways to keep my head busy. One of that ways is music, that’s why we’re here now.

We are living in a dystopian era, with the pandemic having changed the balances of our lives on many levels. How did pandemic affect Stheno as a whole?

We are indeed living in strange times; the pandemic has changed many of what we used to take for granted. But for Stheno, it was definitely a very favorable era. We had endless time rehearsing but also working with Christian who lives in Germany.

Almost four years after your last official release, you are ready to return next October with your second full-length album, “Wardance”. First of all, what should we expect?

The title is the mirror of music. So, the wildest side of the monster took the reins. This time we wanted something really violent, so we decided that the crust, punk and death metal elements that were found all over Stheno’s music, had to disappear, because they made the tracks weak. This time black metal and grind dominated. Christian’s voice gave us the rage we needed.

I consider Stheno to be a very aggressive and violent band. On the other hand, you are fine people and especially you are a caring and giving guy. Give us an explanation of how these 2 aspects of your personality are combined.

Hahaha… We all have violence, hatred, anger and rage inside us. Sometimes circumstances force you to fuel the above emotions and stop being a truly good soul. This was the phase I was going through when we were working on “Wardance”.

Comparing the album with your previous releases, what has changed and what has remained the same in “Wardance”? Where would you like your listener to pay more attention to?

As I said above, the musical elements that weakened Stheno no longer exist. Few things have remained the same. Now as for where the listener should pay attention to, I believe that the sound tsunami will not give him much room other than to bring out their most extreme emotions.

Admittedly, you always fill your music with meanings in the lyrics, because you always have something to say beyond the music. For example, I think “Liberty Crawls In Waste” revolves around specific topics. Is this still valid now? If so, what messages do you want to convey?

No more messages. The album has a war theme and as you will see, “War is Hell” is written somewhere in the album, a quote that was written on the helmet of an American soldier in Vietnam showing clearly in his paranoia what war meant to him. This is not a message, but a reality. We are fed up with messages from people who work only for their own benefit, taking advantage of social and class struggles and everything else that sells at this time. Filthy bastards, we are not with you. I respect the messages of Rubicon in Greece and I will always stand by my brothers from the 161 crew of Poland who pass the messages through their actions.

With your music being close to a war soundtrack and with bullet and guns aesthetics, I guess you’d like your shows to be adorned with a Henkel bomber hanging over your heads, just like Motorhead did, or be filled with fire outbursts, Slayer-style; am I wrong? Or are you more straightforward?

None of the aforementioned is our goal. All we want is for our show attendees to turn the venue into a war zone themselves.

Keeping in mind the production of the previous album, I would say with confidence that Stelios Koslidis was not only your producer, but with an abstract thought he became part of the band. Did you collaborate again with Stelios on your new album?

Of course, Stelios became part of the band, not only because in recent years we work exclusively together, but because he started as a fan of the band and still continues to be. In “Wardance” the production is handled exclusively by him. This time we were not involved at all. He had complete freedom and delivered a massive record. For me, he is among the best sound engineers in Greece, if not the best of his kind.

As a band, you have done several collaborations with other bands, both local and non-local. Would it be absurd to wait for some collaboration again?

Not at all absurd, not at all unlikely, the main thing is for the bands to go along with each other. And just because I want to actually go public, I have been busting Paul’s nuts (from Slavebreed) for a collab, but he’s flying his kite, even though he’s musically coming back with a very strong Deadbeat album.

Your releases kept coming often until your split with Facada. Your second full length album seems to be a little late. Where did this delay come from?

This is because I was not in the mood to look for what else could Stheno offer. Vangelis (drummer) pushed me to start rehearsals again and get off the ice, and also a big park was played by Christian from the Germans Keitzer, who, while we were talking about a project, he finally woke up the Stheno monster and put his voice there.

The most characteristic element of Stheno is the fact that you mixed different genres in your music, making the final result very unique. Did you consciously move forward like this or did it happen unconsciously due to your musical preferences?

This was due to the different sounds of the band. Now it has stopped happening and as we said above many elements have been taken off the band.

Extending the previous question, with which bands would you like to share the stage one night, leveling everything in front of you?

I will answer you in a fairy tale and I will take you back to 1999 when Marduk toured for “Panzer Division Marduk” with Tagtgren on second guitar, in which gig Angelcorpse participate having released a few months ago “Exterminate” and Stheno of course at the opening with flash bangers and grenades and then the beasts come out with anti-tank and bombers. The show takes place in an old military base and in the end, we all play together “Black Magic”. A few seconds later, we get annihilated. I think you did not expect this answer.

Although ideologically you are very opposed, nevertheless I know you like Impaled Nazarene and Marduk. What would you say to those who in the name of nationalism tell us what we should listen to and on which side of politics we should stand?

I have nothing specific to answer, they will always be looking for scapegoats to give meaning to their miserable lives, to their funny concerts and in general to all this circus they have set up. Motorhead, Slayer, Morbid Angel, Malevolent Creation and many more were once considered fascists. This is something that will never end.

What will the next steps for Stheno be? Any chance to see you live? Do you have something in mind?

The rehearsals continue, and in short, we’ll take it as it comes. Performing in Greece is definitely excluded; maybe we’ll think about some gigs in some European countries.

Thank you very much for your time! The ending is yours!