First of all, I would love to ask if you are from Finland, but I guess not? (Kidding of course!) How are you and how has this quarantine treated you?

Lee: Haha, we are not from Finland, we are proud Swedish boys! We are doing great, we miss performing but we have a lot of time working in the studio instead.

Evan: We took the opportunity to write and produce new songs instead of crying in despair during this dark year of music history! However, we are hoping for a new healthy and wealthy Horizon in the very near future. We can see the demand for music and live music, in particular, is more than ever so it will be fun times when the world will be back to normal again! My grandmother was actually speaking native Finnish as she was from Parkalompolo in the very up north in Sweden and my other grandmother, on my dad’s side was from Norway – but it makes me perfectly Swedish, I guess…

How are things in Sweden when it comes to musicians? Are the government people aware of the problems in between smaller groups that cannot really play live?

Evan: In short, yes, they actually are. It is not much to do about it other than look forward and hope everything will go back to normal. People are really longing for live music again. So hopefully there will be a fantastic time to come being in the music industry. Regarding Symphony Of Sweden, our ultimate goal and wish are to go on big tours around the globe! Lee loves to sing live. That’s what he lives for!

Let’s take things from the beginning; would you mind introducing yourselves to us, since you are a new name in our zine?

Lee: I’m Lee, the lead vocalist, I also write the lyrics and melodies to our songs. Some songs I play guitar on, but first and foremost I sing. I always wanted to be a lead rock singer, and every time I got a chance to perform, I took it! And I also play a lot of instruments: guitar, piano, harmonica, trombone, and drums. You can hear my guitar solos on the songs like “Inner Demons” and “A Soldier At Heart”.

Evan: I met Lee in his own tobacco and betting store, and after a couple of years with only small talk we finally found out we both were into music, so I invited Lee to my studio and as he was a singer in need of a producer, and I was a producer in need of a singer, we were a perfect match right from the start. But to sum it up: we are just two guys from the north of Sweden who are planning to conquer the world with their music!

What are the five records that have influenced Symphony of Sweden’s sound?

Lee: Oh, that’s a tough one! I can’t give you five. I do my thing and the melodies and lyrics come to me. I can say that we sometimes sound like Imagine Dragons, Amaranthe, or Evanescence but we have a very own sound, and that’s why we call us Symphony of Sweden, we mix rock with symphony, metal, and big choirs. I just want to make big music in sense of badass guitars, big orchestra, choir, and some extremely good vocals. My heroes growing up were Jon Bon Jovi and Steven Tyler, so I always wanted to have a big voice to complement with awesome music. And thank the Lord, with a lot of practice I found my voice and I’m still growing it.

Evan: That is a question that needs 5000 records to be listed… But sure, for our first album we started to produce without knowing exactly where we were heading sound-wise… Our original idea was to make hits for radio in the same pop genre as Imagine Dragons kind of… However, as soon as I started to add more and more guitar power chords and the drums featured double pedal on some tracks… So, we pretty soon steered away from our initial idea of what we should sound like, and for our next album we will go much much harder! Less radio, more energy at the stage! Back to the question: my personal list (in no particular order) is:

What has been the highlight of the band so far?

Lee: For me, it has been coming up with our sound, our way of working together. And of course, our live performance on Swedish radio.

Evan: We started in January 2020, released our first single in June 2020, and then released the album in January 2021. With a total lack of live gigs (except for a live performance for Swedish radio in a studio) you can say we have lived a pretty anonymous rock life so far… However, the highlight that will last forever is the initial moment in my studio when Lee sang a melody to an instrumental track I had done, which he found on YouTube. That was what became our first single “Scream Out For Something”. At that moment, I knew: someone above with a great white beard had put some thunder and lightning in perfect synchronization and put us together. In a small town, in the middle of nowhere, that was the highlight of highlights.

What is the best way to support a band during these times if buying merch is not an option for people?

Evan: We would love to invite you all to play our songs on Spotify, over and over again, follow us on our social media platforms, and most importantly: subscribe to our YouTube channel! Send us emails where you tell us you love our music. If the economy allows, we have a physical CD for sale of course, but Spotify will do fine as well, but then you need to play our songs a lot and often.

Lee: Share our music everywhere! Let your friends, family, and anyone you know hear us. We have some clothing coming soon: hoodies, T-shirts, tank tops, hats, maybe even thongs if I get my way.  And if you want physical CDs go to our Facebook, and you can find all the information there. If you buy a physical copy of “Inner Demons” you will also receive a signed picture, but hurry, not too many are left!

Let’s talk about “Inner Demons”. When was the album out? Are there any funny stories from the studio for us to tell?

Evan: Inner Demons was released 23rd of January 2021, almost exactly a year after our first meet in the studio. We have much fun when recording, but we are also very focused, meaning we are not joking ourselves to the floor when working, but I have some funny vocal takes where Lee laughs and speaks in strange ways… But as it is in Swedish, it will not be much fun for other than other Swedes to listen to. 😀

Lee: It’s always fun working with Evan. It’s like he knows my voice very well. He knows if I can do it better or if there’s more power in me and somehow he manages to get it out of me. Sometimes I just wanna tell him “let me breathe a bit” but he knows when we are in the zone and we can’t take a break, so I have to find some last energy inside to give my all.

What should we expect from Symphony of Sweden?

Evan: Everything! We can’t tell you all our plans but they are huge. We will continue to promote our Inner Demons album while keep writing and producing new materials. We long to play live. We are working with a great guitarist for our next album, Jim Wallenborg. We also work closely with a drummer called Drumerik. Both of them have promised to go on tour with us when the world opens up again. You should expect to see us more and more, and finally everywhere! We start a bit slow, as we choose to be our own record label, but over time the dice will roll faster and faster!

Lee: The new album is gonna be a lot harder! We have expanded even more into the Metal World. The vocals and melodies are still remaining ”Symphony of Sweden” but with more guitars, faster drums, and like I said, it’s gonna be bigger. We really would like to go on tour and if the opportunity comes, we are gonna take it! We are just waiting, like the rest of the world, to see what is happening with COVID, but we wanna play, we will play, and we are gonna see you all very soon!

Evan: From the bottom of our hearts, we thank You for inviting us for this interview. We bow and invite your readers to check up our music on Spotify and YouTube and final words: stay tuned! 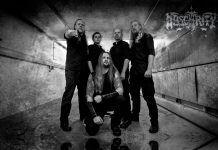