It’s been two years since the release of your previous album “Wolves of Karelia” and if I recall correctly, it was out right in the middle of the quarantine. How did you handle the fact that during it’s release you were not able to perform live, as Wolfheart is a touring act?

We were one of the first bands in the world doing a live stream gig right when the borders got shut down in early spring 2020. That helped us to recover financially from the cancelled US tour and money lost on Visas, merch, etc, but losing the tours for almost 2 years has had a huge negative impact on us. We went really fast back to studio mode and did one EP and one new album too but promotion of the previous album and EP took a huge damage.

And now here we are – “King of the North”. The album has been out since September and it has received a great amount of positive feedback. How was the creative process for “Kings…” given the Covid-19 situation?

It was very peaceful. This was the first time in years that there was not a single tour booked for the same year when we started working on the new album and that made all schedules a lot more flexible and easy. So something good came out from the pandemic!

The band started off as a solo project, but it was soon enough that it turned into a full time band, and also one of the most anticipated and beloved European touring acts. What led to that decision back in 2014?

The solo project status was only meant to last for the debut album writing/recording and even before the debut came out, I had a live-line up and was aiming to make that as a solid line-up for the band. Since then Joonas has been the drummer from our first gig and Lauri came on board just a few months after the album came out.

Within the Wolfheart journey, there have been several lineup changes, including appearances of several musicians from all around the world (now including our own Vagelis from Greece). What do you think is the “secret” to maintain a steady lineup on a touring project like Wolfheart?

We have only changed two full-time members in our ten-year history but because of a lot of schedule issues with our former guitarist, we used a lot of different session guys. Same situation took place when our drummer Joonas had two back surgeries in two years and bass player Lauri had tight schedules with work/school. The main thing is to be able to find good balance and chemistry between all guys. Long tours will eventually make everybody tired, miss home, get frustrated easily and then you need good people around you that will make things smoother.

Wolfheart’s discography includes six studio albums; although for most musicians “all of my albums are my kids, can’t pick just one”, which one of these gives you the fondest band memories?

For me, the dearest is the debut album “Winterborn” but naturally, at the moment I am the most excited about the new album “King Of The North” and just waiting to get back on stage to play the new songs.

Speaking of memories, what has been according to your opinion, the band’s highlight so far, and also the band’s worst moment during the last ten years?

I am sure the biggest highlights are waiting for us in the future. Definitely the worst moment was March 2020 when all our plans got burned to ashes.

You are due to return to Greece in a few days from now, and if I recall correctly, it’s exactly one year since Vagelis appeared on the very same venue last year in 2021 with Full House BC. What should we expect from Wolfheart that night?

Yeah that is pretty much a year ago. Last time I was in Athens for a few weeks was back in January when there was a huge winter storm so I hope this time I am bringing only the musical winter storm to the stage! Fans will definitely see the strongest and hungriest Wolfpack on stage ever.

And now, to return the question, what would you expect from Greece five years after your previous show here?

Most of all, I expect to eat a lot of gyros! Athens has always been an awesome city to play for Wolfheart so we are 110% excited to come back.

What is on the 2023 Wolfheart calendar so far?

Looks like summer 2023 will be busy times with festivals and were are heading back to North America with Fleshgod Apocalypse and Obscura during February/March, including some cool gigs that have been booked for spring too, so our calendar is starting to look nice and full.

Any last words? I swear that’s not a warning.

Hah! Hope to see all of you in Temple on the 10th of December. 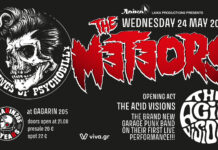 Horns Up Festival 8: Lachrymose and Fovitron added to the lineup