It’s been a decade since the release of Poles’, Jarun, debut album. May ‘21 and the band strike back with its fourth full-length album, entitled “Rok Spokojnego Słońca”, released by Godz ov War Productions.

There are no big differences compared to their previous material, pretty much exactly what we were expecting, in a good way I mean. Jarun’s album opener is extremely aggressive and abrupt, with “W Światło Stycznia” grabbing you by the throat from the first second. As you can assume, Poles ain’t joking. Despite the fact that I despise all folk elements, in Jarun’s album each and every traditional/folk addition is smoothly embodied in the album’s compositions, without getting tiring for the listener, nor intervening to its basic structure. Instead, they have the ability to create a highly cult atmosphere and transport you to places where an unstoppable force rules the universe. Classic Black Metal compositions are given in a very modern way, with folk elements mixing with the main structure and two levels of tempo. In the fast parts, they repeatedly slap you in the face with riffs and blow you away with drumming, while in more mid-tempo parts are evident cosmogenic ambient elements, drones and sometimes acoustic guitars. Lyrics are in Polish, which makes the album a bit inaccessible to non-natives, but at the same time gives an exotic essence that makes the final result standing out. The vocals and their variety help a lot in the final outcome, as in addition to the dramatic and theatrical elements, there are alterations as far as the expression of the words is concerned; in some parts there are screams, while elsewhere whispers, and then narratives and so on so forth. Still, all melodic lines trying to balance between metal and folk style. One of album’s assets is its ability not realizing that it came to an end (while listening to it). The repetitive drone sounds in the background, that reminds “Inquisition”, combined with the ‘breaks’ at key points of the tracks, almost hypnotizes you. For example, I personally lost my mind many times with “Widma”, where if I’m not mistaken, somewhere in the middle of the track I heard Tibetan signing but in a raga rock way. Excellent! 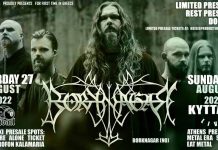 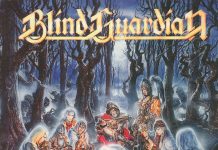