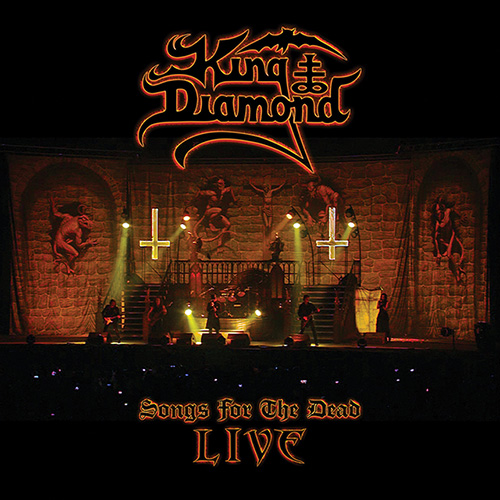 I don’t usually write about DVDs. Oftentimes I tend to buy live albums, whilst almost every time I do, I prefer to talk about the album itself and not the video that may come with it. Rarely even I watch the entire concert. So why bother spending money to get it? In our case though that’s not what happened, and here’s why. Firstly, the anniversary tour of King Diamond, marking 30 years since the release of Abigail, didn’t include Greece as one of its stops and secondly, even being almost 40 years late, an audiovisual feast from “his majesty” shouldn’t in any case be treated as something less. In other words, you’re bound to immerse yourself in it. Despite the fact that it seems pretty pointless to include 2 concerts which share the exact same setlist, it also doesn’t add anything more to the already fully satisfying performance that is the spectacle of the band and actors playing for 80 minutes straight. King Diamond as a whole seems invigorated, with Andy LaRocque, Mike Wead, Pontus Egberg and Matt Thompson doing a great job in accompanying Mr. Petersen. Each set consists of 18 songs performed during Graspop Metal Meeting (Belgium) in June, 2016, and also Fillmore (Philadelphia) in November, 2015, with most of the classics being honored (before the whole Abigail album follows in its entirety), including 2 Mercyful Fate ones, ‘Melisa’ and ‘Come To The Sabbath’. Although these classics were written 30 or so years ago it seems that time hasn’t left its mark on their creators (King’s voice sounds better than ever), and, as all indicates, seems unable to take away any of their former glory. The album is oriented not only towards dedicated fans, but to whomever can appreciate good old’ Heavy Metal anthems presented in a theatrical-live manner.