The night made visible what would follow, as there was some uncertainty in the air from the beginning, that made necessary something more specific in order to end up. Thursday night, will it rain or not, Monasthraki, waiting to see something you don’t know and  you will never learn, possibly with the chance to understand it a little bit.

Reaching Six Dogs, I realized that from the first moments, all spaces were someway full. The show begun on time with the band called Jacks Full. The group is now rising and it brings with it all the enthusiasm of the youth that couldn‘t be hidden, as they were sharing their thoughts about the way they conceive music, something that sounded very pure to me. The first song Justice Gone Astray was to the point. Confident, powerful, giving the full image of their music. As they continued with the Ghost, we realized that they were moving away from punk rock, considering the fact that their music can be characterized like this- we have already said, the night was uncertain – bringing more progressive forms. Circus was another impressive song. It seemed that the members believe in it. The fresh spirit of the group was denoted by the final cover song, (Crazy Bitch by Buckcherry), as well as Come Together by Beatles, and Slither by Velvet Revolver. The truth is that their songs are those which show their true possibilities. One of the advantages are the vocals, (guys, don’ t be afraid to use more second vocals), because the highest tones of the voice were performed accurately, not only following the fellow musicians, but also giving the foundation of the performance.

The night continued with Cemetery Dance. Their name reflects the combination of classic heavy metal patterns, with dance songs, as the Outspoken. That was the reason that the band was complicated for me to be understood, adding their stylistic choices, something that does not usually concern me. On one side, classic heavy metal, on the other side touching punk and all these around dance rock music and very good players. The group was warming up as the moments were passing by, mostly referring to the vocals. Reaching the last song, (Marching Dead) I think that this is the exact way that Cemetery Dance should follow. Now, why should they be more accurate? I think that the reason was that the audience was trying to feel the move, (despite the fact that there was not enough space), but they were feeling confused too. Bonus of the band was the quick solos, the technical capabilities of the musicians and one rhythm section that was standing out.

The audience stayed thoughtful until then, watching the show very carefully- the construction of the club was helping too-. After a big break- I don t grumble because the rest of the show compensated me- Warrior Soul came to the scene and then, yeah, the audience started breathing better.  They started expressing themselves more skeptically in addition to the eccentric movements of Kory Clarke’s theatrical hands. During the whole show, the audience was feeling and was responding to his lyrics, and at the same time, Clarke’ s humor was making them feeling at the same time admiration and confusion.

Musically, it was so nice that you could feel the floor tom and the drum pedal inside you, and the percussion breaks were moving you somewhere out of the space. Any song that came from their third album, – that’s my own opinion- was travelling us to other towns, seasons and places. For those moments it is worth listening to live music. Their setlist was super. I think that there were no bad moments and they kept us awake the whole time. The audience however, was asking for songs before the fourth song. There were approximately two jamming times, showing that Warrior Soul, can be good enough by playing simple rock. During these parts, rhythm section was revealed, showing the impressive bass sound, and the excellent simple solos.

Thinking about Kory Clarke, he didn’t seem tired- we didn’t care at all-, as he told us during the show. His voice, ok, brings people somewhere else, and if you were a little bit more romantic you would notice his theatricality in his low vocals. I think he is one of the performers who sing in order to speak through his lyrics. Moreover, he is one of those who although they know that they are appreciated by the others, they never forget their real character which is truly subversive.

Their performance had everything. Toasting with rum and ouzo by the band, raising the beers, political comments, compliments, jokes and swearing by Clarke to the people who were admiring the situation, and at the same time were wondering “what this guy is telling us”.

The conclusion of the night was that if eccentricity is authentic, it brings tolerance, but if it is combined with talent, it always brings something even more, if you are ready to accept it or not. Regarding the audience now, it seemed from the first moment thirsty, then waiting, then listening, and finally appreciating, which gave more quality to that night show. Finally, I guess that whether you had drunk ouzo or not, that guy made you wake up the next day with a headache, not to mention that some of us might not have woken up yet. 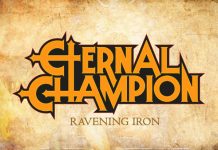