On January 2020, Lordi released their 10th studio album “Killection”, which had the role of a fictional compilation album. “Killection” consisted of a supposed radio playlist by the band from different eras as a part of a haunted broadcast, as well as of different musical genres. Since quarantine interrupted the European tour for that album, Lordi decided to record the back catalogue of this supposed compilation, in a new musical effort that consists of 7 (!) different studio albums, all released under the title “Lordiversity” in a box, via AFM Records.

The catalogue kicks off with “Skelectric Dinosaur” which is a more 70’s oriented classical rock album, that comes in contrast with their melodic casual records. Raw, stiff and slightly punkish, this particular record is definitely among the best ones of the entire…killection. It also features “Carnivore”, a track originally released as a bonus vinyl track for “Killection” in 2020 and was not available neither on streaming services nor on the CD version of the album.

“Superflytrap” comes with a great surprise. Lordi making a disco album, like what the fuck? No matter what, since the monsters are masters in creating obssessing choruses, “Superflytrap” is an earmworm within the first listening session. Whether one likes the band or not, disco Lordi is something we never knew we needed. It’s not the popish disco you might despise. Think of it as something Lordi would do… which did.

“The Masterbeast From the Moon”

Honestly, there have been songs from Lordi that never really got me, and this entire album unfortunately belongs in that category? Could it be due to the fact that prog rock is nothing but my cup of tea? Probably. Should it be because this doesn’t fit Lordi at all? Most likely, yes. No doubt that a prog fan will enjoy this endeavor more than me, though. The track “Celestial Serpents” is something completely different yet interesting.

And there we go with the best of the best. “Abusement Park” is like a twin brother to the “Arockalypse”, or a catalogue of B-side tracks coming from their “Deadache” or “Babez For Breakfast”. Probably the new favorite one for all us hardcore fans of their first four albums. All songs have a perfect flow, melody, and Hella’s keyboards are on fire right here. All aboard the feelings train to an era we all cherist from the late 00’s!

This one is a like a combination of “Abusement Park” and “Superflytrap”, which makes it more of a melodic rock/AOR record. It is more familiar than I could think of, as a sound. The vocals are not always on spot here, but the melodies are perfect as always. Not really something soft, it could also be a side part of “Abusement Park”.

And here we go, one of the best things this band has ever done. A well deserved sound for their imagery and potential. “Abracadaver” sounds like a thrash metal record made from an old thrash band in the era we currently live in. The guitars are perfect, as well as the compositions in general. More actually, the guitars and the bass are what dominates the entire “Lordiversity” concept. This caught me by surprise, no doubt.

Another little something that Lordi teased us with in 2019, with “Shake the Baby Silent”. A more industrial record, but always under the influence of zombies, monsters and freaks, not goth related or anything. Rob Zombie, Ministry and a liiiitle bit of Rammstein are obvious right here, in a record that is not my cup of tea at all, but I’m sure that most fans will enjoy with their hearts as much as possible.

“Lordiversity” comes in CD and vinyl, both in limited boxset versions. 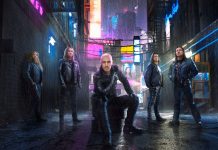