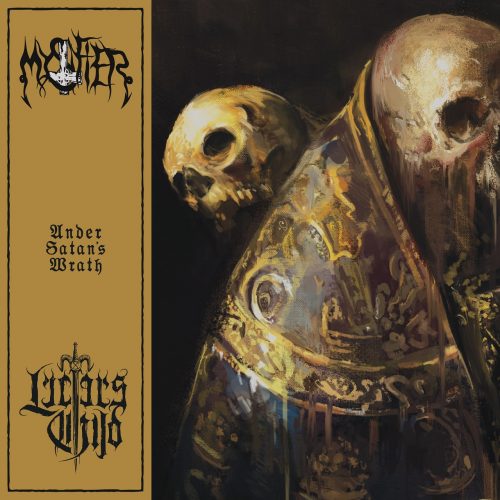 Black metallers LUCIFER’S CHILD and MYSTIFIER have partnered up for a Greco-Brazilian split release on Agonia Records. The six-track endeavour, entitled “Under Satan’s Wrath”, and featuring three songs from each band, will have its release on March 25th, 2022. Pre-orders are now available at this location.

Put together despite an ocean’s distance, “Under Satan’s Warth” displays the borderlessness of black metal in the strict sense. The collision of Brazilian occultism & Hellenic blasphemy ensues blistering sonic impressions in a hellish dance of cultures, robed in a gold black garment from Mitchell Nolte (Aborted, Baest).

George Emmanuel (ex-Rotting Christ), who co-launched LUCIFER’S CHILD in 2013, commented: “After almost a year and half of isolation and profound research, we gave birth to a new seed of evil, ‘Under Satan’s Wrath’. This deep rooted journey contains three new songs from each band, with some special revelations where conspiracies between Mystifier and Lucifer’s Child divulge. A further step beyond the borders of safety, a further step into the abyss where our freedom to craft and sculpt our sound liberates.”

On behalf of MYSTIFIER, whose been around since 1989, founder Beelzeebubth commented: “It’s a pleasure taking part on this monunental split EP with our Greek comrades. It was the right moment to reveal our new band members: Kaverna on lead guitar and Apophys on drums. We met George during a long European tour in 2016. Nice to see him conquer the world with Lucifer’s Child. Hope in the next days, after this pandemic lockdown, we can share the stage together again.”