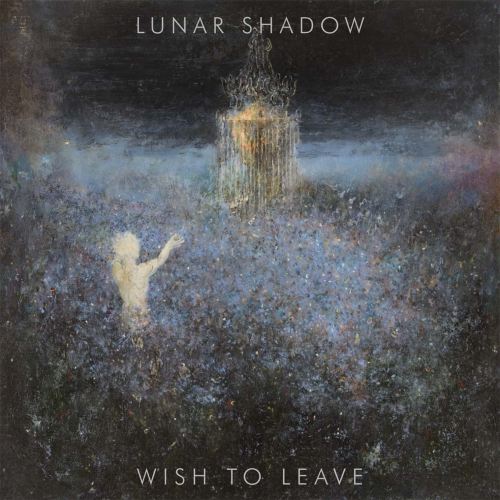 Lunar Shadow from Germany was always a special case of a band for me. If I have to answer the “Give me a band based on a clear artistic vision” question, their name would come into my mind without any second thought. From the very first days of the “Trumphator” EP, it was clear that this band has something very special to offer.

Song by song, release by release the founder, guitarist and songwriter Max Birbaum is exploring the realms of artistic expression through his music. From the darkness into light and back, this kind of expression would often bring to the foreground the creator’s personal questions, fears and explorations, offering a wide spot to the listener to be a part of the journey.

Sonic trademarks were always a very important element on the overall artistic vision of the band: Influences from a variety of musical genres, combined together into songs that would eventually be blessed by a wide musical range. Classic Heavy Metal and in particular this very specific complex version of NWOBHM would be the basic starting point on the band’s music, such elements would often brought to the foreground under epic formulas and -sonic- aesthetics. In this particular point the Black Metal elements would offer their mystical force on the correct parts. There is still room for even more musical elements from the Post Punk, Darkwave and Gothic Rock musical universe, a place that would offer Max this silent, dark warmth that would be easily transformed to pure inspiration. Well keep in your mind all those sonic trademarks. We shall come through them during the journey on the latest album’s dimension.

Here I got to mention a very important fact: Birbaum decided to end all Lunar Shadow’s live show activities after their now-postponed 2020 appearance at Germany’s Party San Open Air. In practical terms this decision results to a band mainly focused on the creative part of the whole thing. No rehearsals for live shows probably means more free time for creativity. Who knows? In symbolic terms and if we bring into our minds the new album’s title, this decision -no more live shows- could be another step forward to the new chapter of Lunar Saga: a chapter more esoteric that finds Birbaum as a lone wolf sharing his musical vision through the Lunar Shadow vessel. This chapter is called: “Wish to Leave”.

Questions are generated even after a simple reading of the album title. Leave? From what? We have to hear the music very carefully if we want to even try to give some answers. So let’s move back to the already mentioned sonic trademarks for a while. Well I have already pointed that the Darkwave, Post Punk and Gothic Rock musical universe was always an important feature of Lunar Shadow’s sound. Well on the band’s third full length album (let me please repeat the title: “Wish to Leave”, thanks) those elements are brought into the foreground, becoming the main basis of the compositions included in here, but that does not mean that the rest of the Lunar sonic trademarks are not present.

I do not know if this is done on purpose but Birbaum is re-exploring the musical connection between the Darkwave and the NWOBHM guitar formulas, a connection that is simply there in existence even from the late 70s: Both the above genres are having common roots on the Punk Rock globe, so musically is not that difficult to combine their aesthetics on a single song. Fortunately Birbaum is talented enough to generate little masterpieces and not just songs that combine different guitar formulas.

Yes I can also hear many Post Punk elements in here and they have to do mainly with the minimalistic approach that is often clear enough on the new songs. This has mainly to do with the orchestration of the material, and let me please tell you that “minimal” does not mean “poor”. Melodies and instrument parts -for example extra guitars- are combined together under the “into the point” logic: What is needed for every song part, have been put on the correct place. A solid and many times cold sonic wall is the result.

I can even hear many 70s elements on the new material. Listen carefully to the all the lead parts on the “To Dusk and I Love You” track which is based on a main hypnotic theme like the ones you would discover on the most obscure Darkwave and NWOBHM bands of the past. I know that the word NWOBHM sound like magic to you. So listen carefully to many of the lead parts AND the many of the riffs on the “Delomelanicon” track, you will discover a little NWOBHM heaven which is growing under an almost coldwave basis. Such combination can be noticed under an even more straight forward approaching on the second “I will Loose You” song. “And Silence Screamed” pretty much follows a similar direction: Dark, straight forward and electrified.

One of my favorite tracks in here is the “Serpents Die” opener. You can hear its dark and melodic intro theme -many Gothic Rock bands would love to have a main guitar theme like the one on this particular intro- which is actually combined with some 70s inspired lead parts. To tell you the truth the intro of the “The Time Of No Time Evermore” album by the mighty The Devil’s Blood came into my mind when I first hear this one.

Ok but where are the Epic and the Black Metal parts we love on Lunar Shadow’s sound? I hear you asking. Wait until you hear the 10 minute long opus “The Darkness Between The Stars”. Everything is there. And in my opinion this is the best track of the album and one of the best songs that the Max Birbaum has ever composed.

You may now ask about the lyrics. Well it could be obvious that the lyrics reflect Birbaum’s world. But as a listener I would like to point how this whole album reflected to me and what kind of pictures and atmospheres were generated in my mind after listenings and listenings:

The album offers a strange kind of “Big City escapism”. Here we are not dealing with mystical or dark fantasy concepts (a world that was explored in deep on the previous Lunar albums), at least not in the album’s entirety. There is something else in here: It is our wide prison -the Big City- firstly revisited through the cold melodies of the songs and secondly through the lyrics. It is the long distance night walks, when parts of the city become stranger -letting us discover signs that are hidden by the daylight and yes this point could be in a way the mystical part of the whole instalment but this depends to each and everyone of you-. It is the night hours on the same room with candles and Vodka where the same questions come into the mind again and again. The reasons of such questioning could be many and Birbaum in particular brings into the foreground the love, the friendship and the complexity of relationships as subjects in questioning. You can bring your own…

Well here it is folks. The new Lunar Shadow album. The six songs found herein are interwoven with melody and darkness. There is a greater emphasis on vocals as well as the rhythmic aspects of Lunar Shadow, who are completed by vocalist Robert Röttig, second guitarist K. Hamacher, bassist S. Hamacher and drummer J. Zehner.

“Wish to Leave” was recorded from July to November 2020 in Leipzig under the careful eye of engineer / producer Max Herrmann; V. Santura of Dark Fortress and Tryptikon fame mastered the album. The sound is fantastic.

To cut a long story sort the album is a masterpiece. Grab it as soon as possible and dive in its dark world. You will never regret it.

As far as the questions that have been set in the review’s beginning: Leave? From what? – It’s better to give your own answers don’t you think? All an all when we leave something behind we are marching forward for something new, that is the only sure thing, or maybe not. 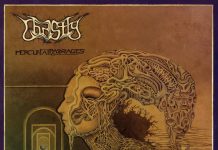 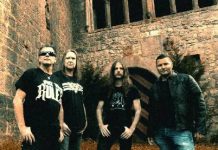 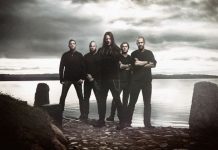