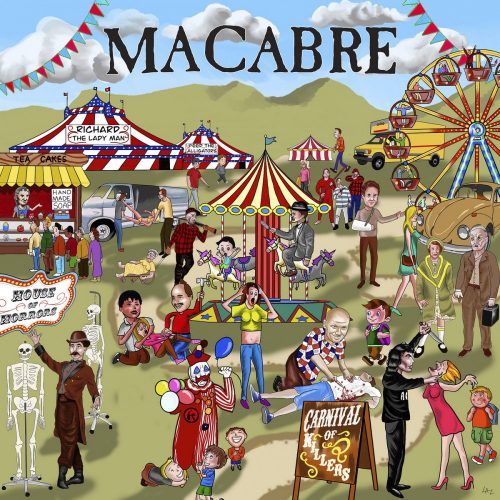 They say that if you get excited, read or watch movies or even better documentaries about serial killers / mass murderers (but also true crime stories in general), you tend to understand people and their feelings better and with more intensity. Many times, this whole process lifts any feeling of anxiety, strengthens empathy and creates a multitude of conflicting emotions, which can scare someone who doesn’t have this inclination to read about murders. However, studies show that it is an excellent process / exercise for the human mind. It is possible, for example, to feel sorry for the victim, but empathize with the perpetrator and understand their impulses and actions, leaving us with a bittersweet taste at the end of the night. The same thing happens with the new Macabre album entitled “Carnival of Killers”. On one hand, I find it absolutely creepy because it combines murder with circus themes (being in a circus is one of my worst nightmares), but on the other hand with its strange complexity it sounds pleasant and I can say amusing.

Even though it’s been ten years after their last release, Macabre, did not deviate from their murderous path, as they offered us another anthology of songs that make you shudder (something that’s intensified by the awesome ability of Macabre to stay true to the features and actions of every serial killer – that is, they do not change the narrative for the story to fit better in their compositions). The same goes for the music of the album, maintaining their own, completely unique, style, of murder metal, writing compositions that mix Thrash, Death and Grind elements, with folk outbursts or children’s songs, making the final result completely subversive. Certainly, it’s not fit for people who search for synthetic mastery and inventive playing. That’s not the album that brings innovative ideas or groundbreaking insights. Nonetheless, it’s a release that will be embraced by the band’s fans and will be loved just like its predecessors. Among the very positive and, I confess, unexpected points of the “Carnival of Killers” I include the great evolution in vocals. Corporate Death does a tremendous job of managing his vocal skills, sometimes singing in horror with screams or in a swampy gore mood, while at other times he becomes the sweetest father who sings calmly and slowly to his child to get him to sleep at night. We are talking about exceptional theatricality here, people! Of course, the rest of the band takes it up a notch as well; Dennis The Menace is a total beast on drums, while Nefarious with his bass has a pompous presence.

As far as the album cover goes, I once again think it should be hung in Louvre. One would say that it’s a twist of the game “Where’s Waldo”, however, instead of Waldo we are looking for the identities of the killers depicted. Among them we single out Ted Bundy with his hand in plaster, HH Holmes, Bittaker & Norris, the Italian Leonarda Cianciulli in the background selling soaps (direct reference to the way she treated her victims), John Wayne Gace as Pogo or Patches the Clown in the low front, among others. Also, that “Find The Killer” adventure we come across in the lyrics, is capital, as well! For example, “Warte Warte”, which is the only song performed entirely in German, is a reference to Fritz Haarmann’s, otherwise known as “The Butcher of Hanover” insanity, “Stinky” refers to Pogo the Clown, “Your Window Is Open” to Richard Ramirez, while “Now It’s Time To Play” refers to the longtime favorite Jeffrey Dahmer.

Due to the fact that this review contains a lot of oversharing moments and I do believe that I’ll spook many people away, I will end this whole thing saying that the “Carnival of Killers” is fun for the whole family and should not be missing from any home! 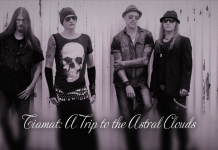