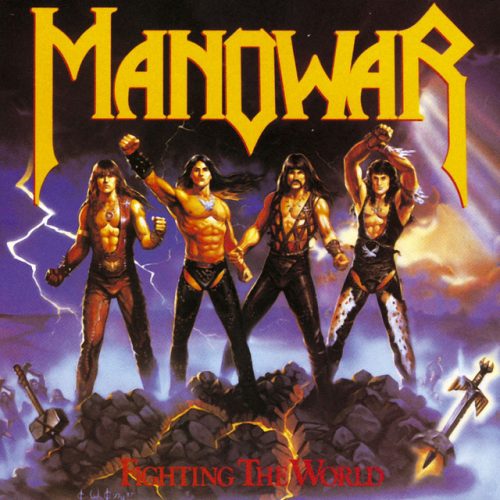 There’s an old myth saying that only the first 4 Manowar albums matter in terms that are the only ones worth listen to from the band. This stupid opinion was popular among many metalheads for almost three decades. That is based in an older urban legend that says that Manowar had four neighbors that wrote these 4 albums and when they died (probably all of together…) the band couldn’t “steal” no more any great song from them and this why they stopped creating superb albums. Well I believe that anyone can understand how ridiculous this sounds…and in February of 1987 when Fighting the World, the bands fifth album was released this rumor should die with the first spin of the record.

Of course this story was too good to be true and damn hyperbolic but what isn’t hyperbolic in Manowar’s day life all these 40+ years of their existence.

This is the first album that Manowar released via a major label (the group changed record label to Atlantic Records in 1987). Their macho heavy metal now was accessible to a wider audience. Yes the quest for a commercial success wasn’t anymore a forbidden fruit and as the band managed to stay true and loyal to its principals without changing sound identity and attitude this couldn’t be a problem even for die-hards (naïve lyrics and useless intros included). Still many have argued about it as the tracks were radio friendly and also catchy as hell but this is due probably to the much better production -please mark that the LP was also one of the first heavy metal albums to be recorded and mixed entirely on digital equipment (Turbo album, by Judas Priest, was prior to that)-. Demaio’s bass, which was always louder than the guitar on previous albums, now had the proper volume as it had found the right balance on the mix leaving room for Ross The Boss to shine. Eric Adams sounded at the same time even better and more mature ready to take on the world.

The New Yorkers were always flirting with Rock ‘n Roll and their songs had many groovy elements paying tribute to American Rock heritage. After all the album’s artwork, which is the first that has a Ken Kelly painting that marked with his works Manowar discography, is inspired by (again) Kelly’s Love Gun for KISS legendary record. Some songs were born for arenas and for sing-along with their fans but yet the epic elements were strong and dominant. It isn’t an easy job to compete your own self and Manowar had a huge mountain to climb as Sign Of the Hammer (1984) was the (raw) epitome of Epic Metal. Not to mention the exact previous ones Into Glory Ride (1983) and Hail to England (1984) which together were completing the Holy Trinity of Epic.

Despite the almost cheesy or commercially appealing three songs that open the album: radio friendly, simple and catchy tunes with memorable and easy to sing choruses that stick your mind, “Fighting the World” – with Scott Columbus’ larger-than-life drums -, “Blow Your Speakers” and “Carry On” -that is sort of a ballad- (all 3) have passed the test of time and now is fans favorites and have featured the live set list of the band in many tours all these 35 years. Plus I have witness many times several bunch of guys to sing it as brothers in arms with holding their beers high in pubs and bars so I can’t see why we have to argue about them…A’ Side close emphatically; “Violence and Bloodshed” is pure metal assault with aggressive lyrics and old school feeling. 100% Manowar!!!

The second half of this album is even better. Even if it features only three songs! B’ Side opener “Defender” is a historical moment as it features a guest narration slot by  legendary Orson Welles that turned a brilliant composition that was originally in ”Battle Hymns” into Heavy Metal History. “Drums of Doom” is samples and sounds of horses galloping, thunders and bells and works actually as the intro of “Holy War” that is an essential finely executed hymn of Heavy Metal. Its motif -soft beginning before sudden outburst into a bass-dominated and full epic flare-up, will be adored by Manowar fans worldwide immediately. “Master of Revenge” is a bunch of Eric Adams’ screaming:

with random effects such as guitar noise and feedback; a one-minute prelude that adds nothing to the album truth be told but gives a small breath to the listener before the glorious “Black Wind, Fire and Steel”, a highlight of all of their career not only in this album. Over five minutes of kick-ass pounding metal with adrenaline explosion and highly energetic performance. “Black Wind, Fire and Steel” is the perfect way to close an album.

“Fighting the World” isn’t the best Manowar album, hell no. It is however the bridge that connects the albums that were born in the early, the raw, the brave years, the albums that acierated their loyal with the albums that had more extensive distribution and increased the band’s prominence in the international heavy metal scene,. It is the record that united the core of their faithful warriors with the hordes of fanatics that came later, the ones that filled arenas, made sold out tours and made their albums sold more than twenty millions worldwide.