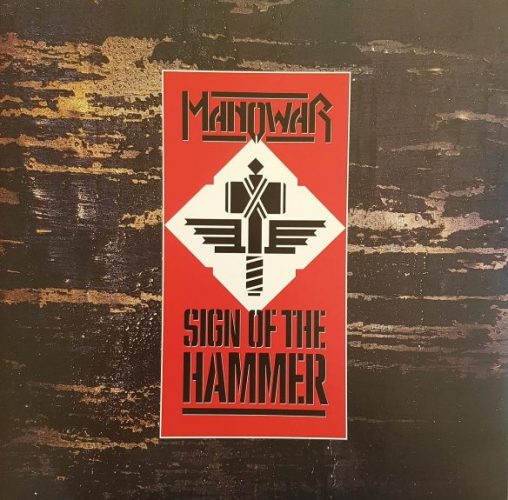 With onward pounding Manowarriors into glory ride since 1980. Although aiming to shine a light on the brilliant in my opinion Sign of the Hammer, I cannot help taking a few minutes to make a quick intro for one the most loved (and loved to hate) bands in the metal scene. For me Manowar is the purest and truest form of heavy metal. I’ll make my point clear later on. Meanwhile, it was 1980 when Manowar’s first guitarist, mighty Ross the Boss (The Dictators), was playing along with Shakin’ Street, opening at the time for Black Sabbath on their Dio-fronted Heaven and Hell tour. Manowar’s bassist Joey DeMaio was handling the pyrotechnics/fireworks on these shows (working as bass tech as well throughout the tour). Hitting into each other, Ross and Joey chatted about their common musical interests and that was it, their spark loaded an epic/heavy metal explosion! Right after the tour, they formed the band. It is said that even Ronnie James Dio himself encouraged them to go for it. Completing the roster, they hired also drummer Donnie Hamzik and singer Eric Adams (classmate and friend of Joey).

“While Sabbath was on stage, Ross and I started jamming in the dressing room”- Joey DeMaio

The first few albums established their epic/heavy sound alongside always with their cult/ /barbarian appearance on and out of stage. 1982’s debut, Battle Hymns, lead us straight to the battlefield. By this time Hamzik had already decided to leave the band at the end of Battle Hymns’ tour and was replaced by Scott Columbus. Lady killers Into Glory Ride in 1983, with this album being definitely the most representative for the band. Like Vikings singing to honor Valhalla throughout their seven-minute anthems, Into Glory remains until nowadays a holy masterpiece. Spitting metal, they were right down to their fucking gloves and boots. Hail to England, predecessor of Sign of the Hammer, released in 1984, regardless being basically written as an apology to British fans for the lost tour, it was an ultimate bloodshed.

“Manowar implies that everybody has got battles to overcome whether its illness, personal things, a fight to be something different, change your life and be better at what you are, and just believe in yourself”- Joey DeMaio

After Hail to England, everybody was wondering … wait … are there ever going to be greater albums than the previous ones for Manowar?? The loudest band in the world (with a stamp!) gave their answer to this question right away, as following albums kept on extending their empire and enriching their legacy. By 1983, the band left Liberty Records and struck a deal with Megaforce Records in the US and Music for Nations in Europe, signing of course with their own blood! Manowar soon returned to work in the recording studio. After leaving Music for Nations, the quartet released Sign of the Hammer ten months after their previous album. So there came the Hammer, and it was indeed a sign that Manowar were here to stay. DeMaio marches with his bass in his hand ripping you with his majestic solo in Thunderpick. The chill you get while listening to Mountains sets your mind and soul in another space and time, an eight-minute delirium. But the absolute jaw-dropper for me personally is album’s closer, Guyana (Cult of the Damned). Even the story to be told elevates the whole fucking album as Manowar’s memento. Back in 1978, a mass suicide of Peoples Temple group (500 men, women and children), held at Jonestown, northwestern Guyana at the behest of cult leader Jim Jones, by drinking poisoned Kool Aid.

“Be good to the children and old people first

Give them a drink, they’re dying of thirst”.

All Men Play On Ten from total leather-lunged Eric Adams setting the moto death to false metal! Hailed is Thor (The Powerhead) via the repeated “live to fight on that final day” – a total headbanging lovers’ wet dreaming, along with gloves of metal. Norse believed that at the end of the world Gods and Giants would battle for control. It is foreseen that the Gods would lose, and many of their deaths have been foretold before the battle. Regardless, Gods still will fight on the final day for the right to control Earth. There is also a cover on this one by Therion on their album “Crowning of Atlantis”. Sign of the Hammer and The Oath are double drumming fast songs established the band as masters of their craft, probably best performances of Scott Columbus’ (unfortunately passed in 2011) entire career; the fills on the chorus of The Oath are out of this world! Several tracks of the album are still their sector weapons on concerts’ battlefield, even decades later. As a genuine child of the eighties album’s, production it’s a typical of early 1980s, lending to some additional charm even though accused to be a bit outdated. Its success enabled the band to embark on a two-year world tour, after which they took 1986 off.

I don’t know If you‘re a Manowar lover or a hater, but all I know is that other bands play, Manowar kill!! Their live shows are each and every fucking time a proof. That’s the feeling I receive when I listen to Sign of the Hammer, and I guess that along with Eric Adam’s tremendous voice is what makes me another Manowarrior.

“I believe in the fans. I believe in metal more than anybody you’ve ever met.
And another thing, I’m prepared to die for metal. Are you?”- Joey DeMaio