“You’re nothing than a vindictive miscreant” spits with sarcasm and repulsion the great Paul Speckmann and the fourteenth Master’s album has just begun! The pillar of dignity Paul Speckmann and his grinding machine of Master returns with a new album through prospective Transcending Obscurity Records.

For those who ignore, Mr. Paul Speckmann is one of those pioneers who inverted death metal. The Master’s debut album was shelved and re-released in 2013 under two alternate album titles: Funeral Bitch and Unknown Soldier (Unreleased 1985 Album), due to conflicts with their at-the-time label Combat Records. This album was recorded on October of 1985, the same period that Possessed ‘s “Seven Churches” was released (October 16th, 1985). A good trivia, don’t you think?

In their new album, with the phlegmatic title “Vindictive Miscreant”, the trio stayed focused on the sound they have established through the decades. Old school music, fast and loud, honest to their fans and totally passionate. The homonym opening track preludes the listener to what he expects from another Master’s album. “The Inner Strength of the Demon” starts with a bass intro that has a beautiful Autopsy-like taste. The crust sound of “The book” is rapid and “Engulfed in Paranoia” follows like stream. The last song of the album “Stand up and be Counted”, comprises a great refrain and is also leaded by the bass. Speckmann sings his sermon with disgust in his unique way. Leads are well-written and don’t cover the other instruments, result of a very clever and good production. Marc Cooper is responsible for the artwork, for one more album, with a really appreciated result.

In my opinion, Paul Speckmann and Master are for death metal what Lemmy and Motorhead were for rock ‘n’ roll. True underground warriors, faithful to the way they play their music, addicted to quality. I am deeply inspired by the band,  a band that never gained what it really deserved. Feel free to check the whole discography of the band and you won’t regret it. “Vindictive Miscreant” would be a good start.

Heads For The Dead:”Skulls” cover on Misfits premiere 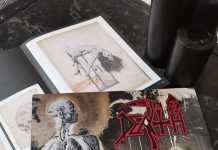