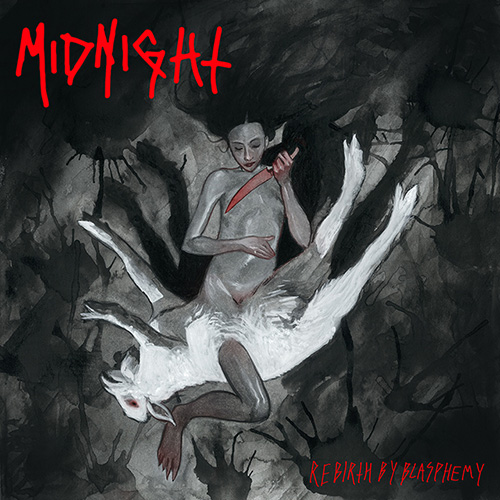 For all of you out there claiming that Midnight Is the best Venom tribute band of all time I have to mark that you certainly not very familiar with their work after all and probably haven’t seen them on stage and secondly you have lost the touch with Venom’s discography somewhere between ‘Calm Before The Storm’ and ‘Resurrection’. So we are talking about twenty+ or more years. I won’t deny that Venom is their main influence but I have a rule that if a band follows it I don’t give a shit about the so called originality of their music direction. The concept of adapting a project is based on performance with authentic tools, on reassessment, on differentiation and ultimately on the conscious avoidance of identification with the original. So the Cleveland finest after years in the underground and with the help of Hells Headbangers and after three studio albums besides the splits collections and ep’s are now ready for their big time under the label of Metal Blade Records. The album starts impressively with the nwobhm roaring anthem “Fucking Speed and Darkness”. Motörhead and Venom worshippers can find many gems except “Escape to the Grave” with catchy guitars, solid drumming and steady bass lines, such as “Cursed Possesions” and “Warning from The Reaper”. If we are talking about sticky choruses, “Rebirth Of Blasphemy” has ten of them and tons of riffs from melodic to mid paced (“Rising Scum”) and from speedy to rapid fire ones, like “Devil’s Excrement”. Nwobhm, speed and thrash elements are blended extremely perfect from Athenar and co creating an explosive mixture of old school punk with heavy metal coming from the late 70’s early 80’s era. So if you are looking for straight-forward heavy metal made with unholy black n roll ingredients, with filthy shrieking vocals, angry yet melodic guitars and catchy as fuck songs This is your album, as I believe it can’t get any better than this.

Psychotic Waltz: Release a video for the song “All The Bad Men”

Midnight: Shared a new video for the single “Fucking Speed and Darkness”