Mörk Gryning is an old school Black Metal band from Stockholm, Sweden. They were established in 1993 (die-hards of the genre may remember their cult debut “Tusen År Har Gått” that made an impact in the underground circles back then), and their name actually means “dark dawn” in English. They released five full-length albums between 1995 and 2005 and now, after fifteen years, are back with “Hinsides Verde.” The album is more than decent. It is actually awesome. After fifteen years of slumber, the Swedes have awakened for good in order to unleash their fury upon the masses with their deadly new album. Translating into “otherworldly wrath” or “wrath of the world beyond,” ‘Hinsides Vrede’ represents the impending doom of a world coming undone at its seams. I believe that ‘Hinsides Vrede’ opens up a deadly new chapter in their yet evolving legacy. Yes, we are dealing with a brilliant comeback. The album features nine (plus three “The Depths of Chinnereth”, “Hinsides” and “On the Elysian Fields” more than one minute long instrumental melodic compositions that work as the intro, a small break during the album and the outro respectively) well written songs, where the riffs are fast and icy, the drumming rapid, and the melodies sufficiently pronounced to provide a certain amount of accessibility. Their music sounds calm and satisfyingly melodic, but with a brutish force of black metal aggression, and their simple structural side made the material visibly appealing without need of progressive over-complication. Highlights: “Infernal”, “Without Crown”, “A Glimpse Of The Sky” and last my personal favorite “Existence In A Dream”. 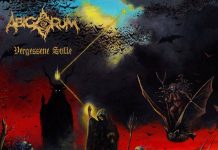