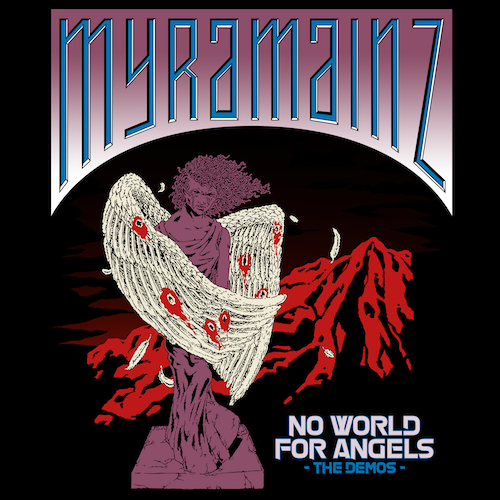 Probably Lost Realm’s mastermind Andre Santos sleeps in a cemetery or an ancient tomb or something where Heavy Metal jewels are buried and every night, a spirit whispers to his ear where to dig in the very next morning to find another forgotten treasure of our music. This is the only logical reason I see, that explains how easy this label cuts so many “must-buy” underground reissues.

Myramainz started as Strychnine a band we already wrote a couple of words almost 4 years ago, for their brilliant “No Escape… Live Or Die! 84-87” , that once again Lost Realm Records had released in 2017. So you might think another great (U.S. or Seattle) underground Metal band?  Well actually … yes indeed! Myramainz can easily stand next to Heathen, Metal Church, Watchtower, Flotsam and Jetsam, Powermad, Realm, Toxik and/or Forbidden, as their technical speedy/progressive proto-thrashy power metal’s quality declares.

Strychnine recorded Pull the Plug demo in 1987 and after a while their bass player Rich Furtner had a short collaboration with Sanctuary, but he returned to the band but the name had already been changed to Myramainz.

There’s a variety of fast and laid back songs still the technical skills of its members can’t be hided either they use staccato riffs or shredding guitars. The songs are building up on progressive patterns, while the second demo is more Thrash directed. Experimental still commercially wise close to Metal masses that were fond, back then by Thrash Metal, this collection shows a band full of skills and a plethora of aggressive ideas spread in a Heavy/power environment.

Highlights: Bowman’s vocal performance that might bring you in mind David Wayne, the dark lyrics, the solid rhythm section and the dazzling unrelenting riffs. Check also:  “Better Shred Than Dead”, “No World for Angels”, “Exit This Trance”, “Pieces”, “Misery In Progress” and “Oblivion Dream”.