These days we have pirate metal, Viking metal, or even troll metal. So it must be hard to find a niche where you can build your repertoire around as a dedicated metal band. So of course I was surprised when I found out about the ‘Apalači folk metal’ of this West-Virginia based two-person project Nechochwen, who explore the theme of Native American heritage. And I immediately want to erase any wrong ideas here. Unlike previously mentioned metal genres Nechochwen (nylon and steel string guitars, vocals, hand drum, flute) and Lalawas Pohonasin (drums, bass) are serious about their craft and they do not use the Native American theme as a gimmick or to attract attention. They specifically seem to focus on the Eastern Woodland Indians and share their history through a blend of atmospheric black metal and neofolk.

The first notes of the album consist of an acoustic guitar tune as we might expect from an Agalloch album, but shortly after the 1 minute mark ‘The Serpent Tradition’ really takes off. Here we get a glimpse of what this band has to offer. Atmospheric passages alternated by fast-paced melodic guitar riffing with both emotional cleans and relentless screams. “Impending Winter” is a short acoustic piece that reminds the listener of their neofolk roots. While I did not have the time yet to explore Nechochwen’s full repertoire it became clear from what I’ve learned that they only slowly incorporated more and more distorted passages in their music. So Heart of Akamon might be the first ‘pure’ metal album of the band. But this first introduction certainly invites to dig deeper in this band’s history.

That Nechochwen does not write about light topics becomes clear on the intro of “Lost on the Trail of the Setting Sun”. We hear gun shots and screaming people, reminiscent of the violent past of the old West. The beautiful thing about genuine folk metal is that it incorporates musical elements of the culture it tries to represent. “October 6, 1813” is a perfect example where we can hear a beautiful Native American flute melody. Later songs on the album are all about building atmosphere and conveying emotions. Through the music you are drenched in the sad stories about hard struggles of the Native American people Nechochwen tries to share with us. Simple and minimalistic at some points, ferocious and straightforward at other times, with glimpses of lightness and hope from time to time. It is difficult to pick a highlight from the latter part of the album as it is best listened to as a whole. Skipping songs would be a shame as the album invites to sit back and be captivated.

Nechochwen offers more than the standard black metal with folk influences. What lingers the most after listening to the band’s third full length is the sincerity with which they have written their music and the pride for its ancestry. A great discovery and a band definitely worth checking out! 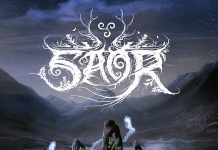 Dissenting Minds – Fly In The Face Of God