Today NECROTTED release their live video for “Cynic Suicide” that was recorded at some shows the bands was lucky enough to play during the pandemic.

The new video “Cynic Suicide” is premiered today on YouTube and
can be seen here:

The band states:
Despite an ongoing worldwide pandemic, we were granted to be able to play some damn awesome live shows in the summer of 2021, even under appropriate restrictions. Our fans partied, headbanged, moshed and roared with us and we want to thank each and every one of them for these beautiful heavy moments.

That’s why we release a new live music video for our song ‘Cynic Suicide’ today, edited from collected video footage of the past concerts in 2021.

The song is taken from our current album ‘Operation: Mental Castration‘, which was released via Reaper Entertainment Europe earlier this year on 19th March.

The video is considered as a very special review of our festival summer 2021 and also as a small thank you to our fans for the incredible support over the past months and years. 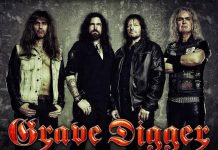