Nightwish are standing strong to their tradition. After each tour, a live release comes up. This time, it was more than special, though. Nightwish completed their “Decades” tour in 2018, which they signed with a live DVD on the Argentinian fields of Buenos Aires. This tour was more than just a live release for the diehard Nightwish fans. It wasn’t accompanied by a new release, but the setlist was based on old and underrated songs from the “Angels Fall First” album, to “Endless Forms Most Beautiful”. They have already done two concert DVDs with Floor Jansen, back in 2013 and 2016 respectively, but this one mainly focused on “Wishmaster”, “Oceanborn” and some really forgotten gems, such as “10th Man Down”, “The Carpenter”, “Dead Boy’s Poem” and “End of All Hope”. The latter one was the opening track, and ever since, total madness. The three latest albums were left a little aside here, but considering how much of an important role they were having on the past few tours, no one missed them so much whatsoever. Nightwish is mostly appreciated for their bomb live performances and stage presence. Floor Jansen has found her spot and the entire band is in perfect shape and extremely happy. “End of An Era” was accompanied with Tarja’s departure and “Vehicle of Spirit” was a double live release where people got more into Nightwish’s live performances, but “Decades In Buenos Aires” is a honorary mention to their endlessly supreme discography. Some songs were “lost in time”, but Floor restored them with great confidence. She really did erase Tarja Turunen. I appreciate all vocalists that have been through the band’s history, but no one could ever reach Floor’s high live (pun intended). I dare you not to cry when the “Carpenter” or the “Kinslayer” kick in. With all those, we cannot but wait for the new album in spring, after five years. All hail the Oceanborn.

Diabolic Night – Beyond The Realm 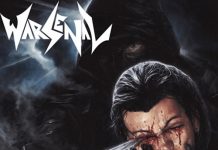