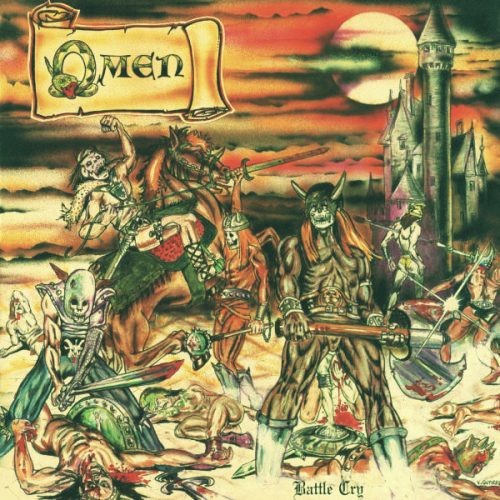 It’s this fuckin’ time of the year where everyone for some reason makin’ it’s lists. Either for the things to buy for the Xmas table or the New Year’s Eve, either for the year that goes away and the things, moments, albums, books, and faces that marked it. And I fuckin’ hate this time, believe me. And I’m wondering how difficult would be for an music editor to make a top-12 album list for 1984…a fuckin’ brainteaser indeed on how to solve the riddle and fit in on one list Bathory, Queensryche, Mercyful Fate, Cloven Hoof, Manowar, Metallica, Cirith Ungol, Iron Maiden, Venom, Twisted Sister, Jag Panzer, Accept, Whitesnake, Saracen, Tokyo Blade, Heavy Load, Celtic Frost, Armored Saint, Van Halen, Tank, Deep Purple, Exciter, Malmsteen, Europe, Fates Warning, Metal Church, Voivod, Running Wild, Saxon, Scorpions, Manowar, Dio, W.A.S.P., Ratt, Judas Priest, Anthrax…damn what a year !!! So these were the days and that’s the kind of problems you want to have in your mind, and not to try to make a list with a shotgun marriage approaching, as we try to find 12 albums for our lists in the last 5 years…after all you can lead a horse to water, but you can’t make it drink…

Back to 1984, Omen released a remarkable debut album that helped to define US Power and Epic sound with its quality and its raw characteristics, and actually shaped along with Manilla Road and Cirith Ungol the swords-and-sorcery worshipping sub genre. Certainly the N.W.O.B.H.M. influences were still there. But Guitarist Kenny Powell (previously in Savage Grace) delivered an excellent pack of fast, unforgettable and incredibly varied, melodic, Maiden-isque riffs (mostly “Killers” -era) that fitted perfectly with the storytelling of the dragons, warlords and gladiators themes. And by using only three or four riffs in every song, operating with frugality and avoiding of being rambling and verbose, confirming that the “verse-chorus-verse-chorus-solo-chorus” approaching is as predictable as solid. I believe the only moment that they try to be more experimental is when the use acoustic guitars on “In The Arena” or something. Frontman JD Kimball was not only the main composer (with Powell), but also responsible for this magnificent raspy voice that amazed and haunted the metal masses. Instead of using the high pitched, operatic vocals that were so popular at the time, he sung with confidence, full of emotions and expressive, like a wise man that has lived the stories he shared around the fire with his younger comrades. Brian Slagel’s production is rather raw and lo-fi, but it is actually the proper one for a record like this. “Battle Cry” was originally released on LP and cassette in 1984 via Metal Blade and in CD format only after 3 years in 1987. The original mix was done by Ron Fair and engineering by both Scott Singer and Bill Metoyer. The bass lines performed by Jody Henry (long time friend of the drummer Steve Wigg, that was in Savage Grace and was recruited by Powell to Omen) are clear, thick, noticeable and easy to distinguish among the other instruments. The drumming by Wigg is strong, with analog, organic, warm sound and flows in a barbaric tempo.

“Battle Cry” consists 11 Savage hymns of epic metal as eternal values and principles that are born in the battle fields and moments before man meets his destiny are sung here, with pride and at the same time rude settled way. “Death Rider”, “The Axeman”, “Last Rites”, ”Dragon’s Breath”, “Be My Wench”,“Battle Cry”, “Die By The Blade”, “Prince Of Darkness”, “Bring Out The Beast” and “In The Arena” are not just a couple of catchy titles songs that are gathered in a well written and performed album. They are the ultimate songs included in the absolute soundtrack of your appointment with fate and death.

Many remember their famous motto “Tired of seeing bands that are better looking than your girlfriend?’”, that Omen used before their shows and claim based on that, that the band would have been important even if the only thing that they would offer to metal community would be that certain motto. But damn Omen are more than one catchy phrase or a landmark debut album. As we wrote again earlier above, they are responsible for defining US Power Metal along with the two other titans of the genre Manilla Road and Cirith Ungol. Their whole aesthetic, from the lyrics, the artwork cover, the riffs, the vocal lines, the instrumentation, the song structures, their attitude are like small or bigger pieces of a gigantic mosaic that exalts fire and steel, eulogizes bravery, praises the truth of the axe, violence and sex, the ethics of honor and the values of the warrior spirit and glorifies trve metal high ideals as seen and narrated from the blue collar perspective.

“The smell of death lingers in the air
Bloodstained bodies scattered everywhere
In the distance
Thunder in the sky
See the sorrow
Hear the battlecry, battlecry
Battlecry”