Québéc finest, Outre-Tombe (French for Beyond the Grave) return after 3 years of silence with an album that hopefully should get them to the elite of Death Metal. It may sound a too ambitious statement, but ‘Nécrovortex’, their second album and follower of 2015’s ‘Répurgation’ (another gem of pure old school Death Metal) is a born to be classic album. Even a deaf could hear their influences and no one claims that these guys play something authentic in terms of originality. Still their music has the quality to stand alongside the bands that formed their sound. Grave, Nihilist, Asphyx, Unleashed and Pestilence should feel proud for being an archetype for Outre-Tombe. The production is capturing the 80’s feeling and has a breed of early 90’s ptomaine that choked our throats back in the day. There’s so intense and a morbid aggression on their playing that the listener feels like a punching bag, as tons of excellent razor-sharp guitars and unrelenting drumming hit him like iron fists hard on his face. Lyrically, the band has a sense of macabre and horror, but tries also to be a bit sophisticated. I enjoyed the French lyrics that their bassist and vocalist Crachat (a name that we can translate it to ‘spit’) unleashes with rage and determination, as they give a characteristic in their music. The highlights of the album are definitely the guitar solos proving that the new guitarist Désastre replaced perfectly Danger. Check out La Crypte, Désintégration, Concile cadavérique, L’Enfer des Tranchées and Vengeance Spectrale, in a record that should be in every trve old-school death metal maniac! 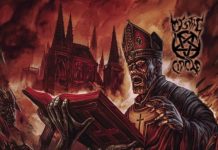 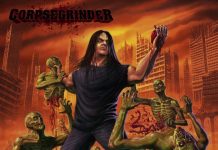