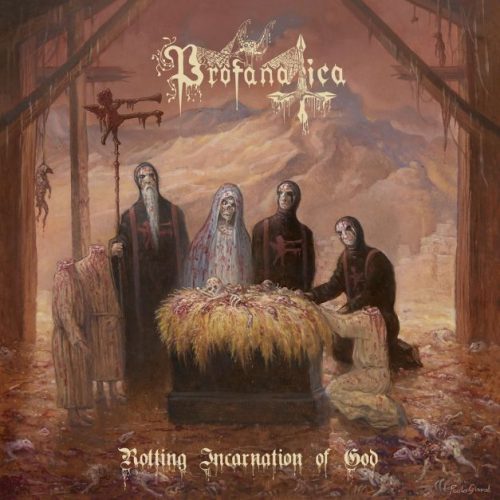 A sparkle of excitement run through the underground scene in 2007 when one of the most infamous and vile bands from American soil released their first full length album, more than fifteen years after their famous demos in the early nineties. Profanatica have been steadily releasing records since then, while touring the world, they have significantly cleaned their sound but neither the drive behind the music nor their style has been altered since day one. It is a challenging band that causes distress even to fans of black metal, and it can be completely misunderstood at first glance. Their history is interesting on its own and the members have several side projects that are worth listening to, with their vision being at a love-it-or-hate-it condition, which is unique enough that it has never been replicated all these years.

The new record “Rotting Incarnation of God” seems to equip Profanatica with new wings, as they have now moved to Season of Mist and some differences are noticeable, mostly in the area of promotion. They will be touring full time for the promotion of the album, they have done some professional photo shooting (farewell to the old days) and the record’s artwork was done by the goliath Paolo Girardi, whom you might have recognized from the artworks of Blasphemophager, the reissues of all Inquisition albums, as well as a bunch of other releases. Heck, the band seems to have their own clothing now, with the known Profanatica angel sigil, and the guys themselves are featured in the cover of the album (the majestic beard of Paul Ledney can’t go unnoticed).

As an act that was once an outcast even among the underground, now it seems that it is finally appreciated and wholly embraced, and an advantage you can’t take away from them is that they haven’t really gone smoother musically either. “Rotting Incarnation of God” will blast you with many filthy riffs, slow guitars, ugly vocals, the characteristic, repetitive drumming and the killing of any notion of atmosphere for the sake of profanity. I found several tracks to be more memorable than their previous two albums, even though I loved last year’s EP, and while it isn’t different music, it still pinpoints and high peak of the band’s career so far.

There are some issues with the production, which grants the instruments a great sound but I think the vocals are mixed way too high and at times it feels as they were edited in the studio to sound like a really loud whisper. For some short, faster moments in the songs, drumming could have been a bit fuller, but in general it is what Profanatica can produce and they nail it with “Rotting Incarnation of God”. Tracks like “Sacramental Cum”, “Mocked, Scourged and Shit Upon” and “Tithing Cunt” come consecutively in the album and are disgusting but lovely, especially the last of the three having some guitar lines that truly make the band shine.

I enjoyed all tunes of the album almost to the same extent, maybe except the snail-paced moments of the self-titled track, which was just something minor in front of the whole offering that really makes time fly throughout the listen. All in all, Profanatica don’t diverge from their own self at all in “Rotting Incarnation of God”, they keep their compositional ideas and lyrics as we knew them, with a noticeable overall better crafted result for them as a band. I can’t say people that dislike them will have a change of heart with this record, but their fanbase should get ecstatic. Welcome to the death of melody.

Abyssus – Relics Of The Past ‘Ep