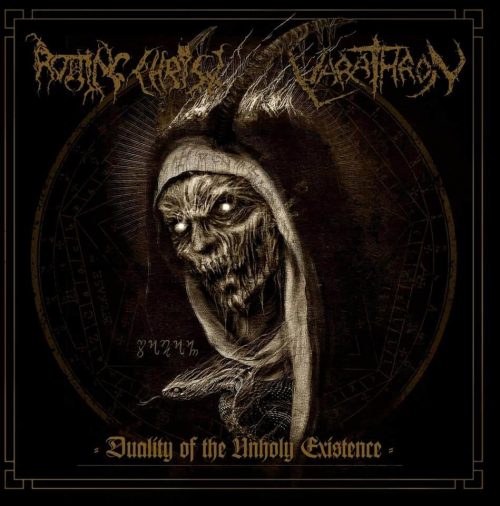 In a not so distant but still very different time than the one we’re traversing through at the moment, split releases held a special meaning andclout on the underground map, so to speak.

A co-release of two -or more- bands brought out anymeeting of minds, the mood of solidarity and backscratching between them, but also helped the fans of one band meet the other group.

Most of the times actually, bands recorded material for it to be included in these particular releases and so created the sole, meaningful purpose of them to exist besides any symbolic/ideological status like I mentioned before.

Both Rotting Christ and Varathron have on their discography some really important split releases -I’ll mention distinctively “The Black Arts / The Everlasting Sins” 12″ split Necromantia did with Varathron on Black Power the year 1992, as well as the 7″ split that Rotting Christ did with the Italians Monumentum, released by Obscure Plasma on ’91.

Yet, besides all these years that the Greek Black Metal bands co-existed and throughout their long-lasting course never did they had a split together. Still, this finally happened and the end result will see the light of day on the 28th of June by Hells Headbangers.

The split will be entitled “Duality Of The Unholy Existence”, and will be available in 222gold vinyl copies and 777 black vinyl copies. I’m too bored at the moment to wine about the whole hype thing with the different editions and colors, so I will focus on the music part that’s concerning us the most. What? No?

Rotting Christ will have their piece with “Spiritus Sancti”serving the claustrophobic, pompous style that characterizes them over the last years. It’s actually not bad at all.The guitar pattern also serves the instantly recognizable classic Christ approach, whilst the song is gradually climaxing, the keys focus on creating atmosphere and all in general seem to be on the right path, sounding as they should.

Varathron’s “Shaytan” on the other hand is a mini epic/saga. It shows us -once again- that the band is going through one of their most inspired periods composition-wise, while the arrangement avowedly tells the story -not coincidentally- of how important have been Rotting Christ as an inspiration for Varathron. The tack, through its “Non Serviam” meets “Dead Poem” prism, upon which is build and developed, is simply a work of art and a fixation of some sort, to put it mildly.

So I support this Greek Black Metal split that brings you back to the ’90s. Consider buying it mostly for the Varathron side and the whole, general conceptof the attempt.