Jason Rainey, the founding guitarist of American thrash metal veterans Sacred Reich, has passed away at the age of fifty three following a heart attack, as his former bandmates have confirmed. Rainey founded the band in the 1985 and performed with them up to last year, when he was replaced by Joey Radziwell, making last year’s “comeback” album, “Awakening,” the only full length Sacred Reich album that Rainey was not part of. A message from the band reads as follows:

“It is with deep sadness and broken hearts that we must announce that our friend, guitarist and founding member of Sacred Reich, Jason Rainey has passed away.

“Jason started the band after only playing guitar for six months. With sheer determination and will, he lead us through the early years of the band. He worked tirelessly. Sacred Reich was his life.

“In recent years he faced some serious medical issues. He ultimately succembed to a heart attack on Monday, March 16. He was 53 years old.

“Jason, we wish you peace and love. 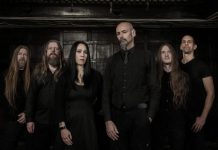 My Dying Bride: New video for ‘A Secret Kiss'