With four out of five original members, Sanctuary releases their third album after twenty two years of silence. The demise (?) of Nevermore leads Warrel Dane and Jim Sheppardto the decision to revamp their old musical vehicle and bring it up to 2014’s standards. I must mention here that i consider Nevermore to be among the best bands of the late 90’s-early 00’s. I have a great appreciation for their work and I in my mind the band’s musical and lyrical direction was the natural evolvement of Sanctuary’s ‘Into the Mirror Black’. I say this because the pessimistic vibe that Nevermore had falls heavily in this album’s compositions. The labyrinthine song structure gives the impression that this is the new Nevermore record rather than Sanctuary.

The album itself is how I expected it to be. If I could describe it in a few words I could say that it’s Nevermore with some Sanctuary bits that are well recognizable in the classic heavy metal solos of Lenny Rutledge. But let’s dig a little deeper. The production is nice and clear (as expected) and brings out the groove in the compositions. The mid-tempo tone is dominant throughout the album in oppose to the thrash-speed element expectation that both Sanctuary and Nevermore had in the past. Of course there are some ballad type songs like ‘I am low’ (dreaming neon black comes in mind) and ‘One final day’. Warrel’s voice moves around the style he adopted in his Nevermore era (forget high pitched screams of the 80’s) and it’s in good shape, as well as the whole band that plays perfectly and although it’s a good record revealing thehard work that has been done in the compositions there is not a single song that stands above the rest. Warrel’s signature lyrical themes together with the well composed songs create a convincing effort and a heavy atmosphere but not what a Sanctuary fan expects from this release. Nevermore fans (or better, Warrel Dane fans) will surely appreciate.

Overall it is a good record that justifies their existence as an active band and not only as a live act. Sanctuary fans though will wait to hear the old songs in the concerts. 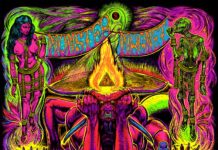