Normally it is very easy for me to write my thoughts about an album, but this time I found it so difficult and I suffered for it for several weeks, since I cannot phrase and externalise accurately the feelings that Satyricon’s ninth complete work has given to me. Although I have never been a hardcore fan of these Norwegian duo, this album has entered to my brain like a parasite and sickened me, and no matter how many people insist that ‘Satyricon does not worth since they stopped playing black metal music’, I want to throw ‘Deep Calleth upon Deep’ on their face.

A hundred percent mission-critical, without being barren of anything and with an excellent flow from part to part and from track to track, the album is built in a way that it does not lack in power and aggression, nor in blackness. Quite melodic and rhythmic when it has to and more dark and slow in other moments, the dark rock/black ‘n’ roll style that Satyricon have adopted over the years, blends with the black metal atmosphere and mixed with the purely aggressive vocal lines, without a trace of melody, creates a strange but catchy result.

What makes Deep Calleth upon Deep grandstand from the band’s recent (and not only) past is the avant-garde element, which now is more recognizable than ever before. In some ways, the album is the definition of bipolarity, since on the one hand it seems to incorporate all their previous releases into one, at the same time it is so fresh and innovative, the result of Satyr’s great ability to create ‘diamonds’ without following the highroad and without thinking and composing grounded in forms and ‘rules’.

The production is finest and the result is upholding the necessary filth it needs in order not to lose the essential feeling, while the only thing I did not like on the album is the artwork, unlike those of the two singles.

In short, many will hate ‘Deep Calleth upon Deep’, but for me it is the best album I’ve heard so far in 2017, but also the best one that Satyricon have released over the last fifteen years. If onto the albums of the post-Rebel Extravaganza era were some excellent songs but as full works in total they barely exceeded the base, ‘Deep Calleth upon Deep’ deserves its rating in spades, through the depths of my heart. 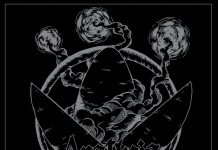