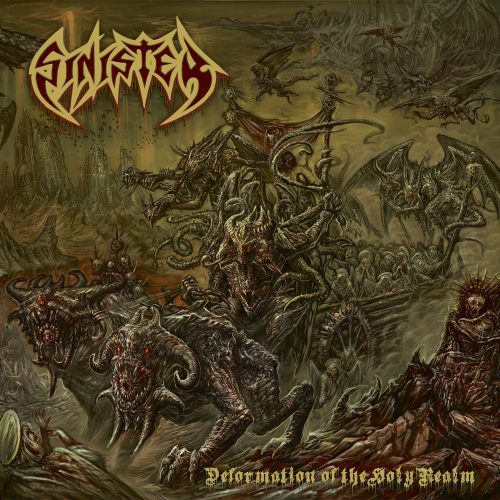 Sinister are really on fire as the last years they have released great albums without any delay (almost one album every two years) with “Syncretism” (2017) being amazing. The band reminds to the fans that is still alive, not just active like other bands of their age who just release albums to maintain their reputation but lacks of quality. Sinister plays with appetite like they are newcomers and the music they create is full of energy.

Their new album “Deformation of the Holy Realm” is the physical continue of its predecessor. I don’t know if it is better than “Syncretism” but is of the same level. Eight new songs (plus an intro and an outro) of pure death metal are included, cleverly composed and under a good production.  The self-tiled has a sense of Morbid Angel that I really like, “Apostles of the Weak” has a very beautiful “majestic-like” chorus.  “Scourged by Demons” and “Unique Death Experience” have some backing vocals that are flirting with black metal and they are more than just interesting. Excellent leads also should be mentioned (especially at “Unique Death Experience” and “Oasis of Peace – Blood from the Chalice”).

Sinister is a pillar for European death metal and with every new release they made it clear. We salute and enjoy!