Before gathering my thoughts and putting them in order, I think I ought to make a confession. I was asked to review this record a couple of months ago, but when I realized it’s a single release with two tracks by a female fronted band, I pushed it aside without second thoughts. Well, shame on me. The record is brilliant! The melodies and power that the tracks produce caught me by surprise!

Now, let’s get our facts straight. Steel Inferno is a female-fronted heavy metal group, having its base in Copenhagen, Denmark and has been active since 2012. Apart from Denmark, originally the band members come from Greece, France and Poland. “Arcade Warrior” is a 7” single vinyl release, which is consisted by two tracks, entitled “Arcade Warrior” and “Across the Wasteland”. This single was released independently, limited to 300 hand – numbered copies. What we’re dealing with is a record full of classic heavy metal tunes and potential to evolve into something really great in the near future. The record starts with a small intro with music suitable for an arcade name; a witty choice, fulfilling the title track’s name and lyrical theme. The only weak point in the track is the solo on the middle; all it needs is for the guitar player to let go and compose something having no worries. I’m sure he can do that. The album’s second track is “Across the Wasteland”. Clearly a more mature work, with much more strength and a punk attitude. Everything would have been better if the recording and production process had been better taken care of. The record sounds like a rough studio session, thus it lowers the quality of the trucks. Should they pay closer attention to recording and production, the band will flourish.

Conclusively, “Arcade Warrior” is a decent heavy metal release, filled with passion for the genre and judging by the bands work, I truly believe they’ll take it one step further and create a big fanbase. As I said before, the only weak points are the poor solos and the weak production. Nonetheless, it’s absolutely worth checking, especially by the devotees of the genre. 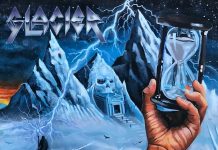