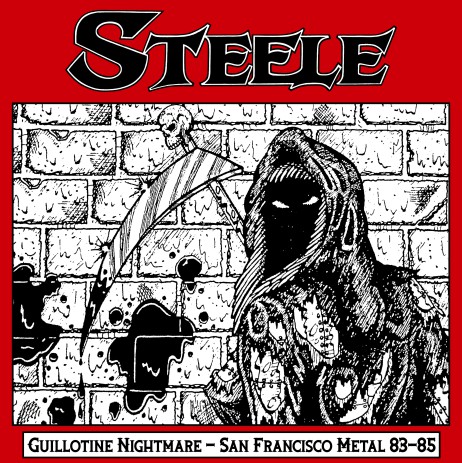 Steele is another lost gem of early U.S. Metal, coming from one of the most proliferating metal scenes in the 80’s, San Francisco. They were formed in 1983, with founding members Dave Hart, Scot Harlan and Dan Levitan, and became a cult act in the Bay Are metal scene, when they opened for Saxon on their first U.S. tour. Hart even though he was a drummer, he at the end chose to become a guitarist. Throughout Steele’s history there were primarily two drummers. The majority of the time Jim Lang was the drummer but for a year or two Steve McLaughlin took on the role. Both are featured in the different demos that were originally released. While bassist Dan Levitan was also serving as their manager. After the opening live for Saxon they started to book some gigs in the Bay Area and at about this time Dan Levitan left the band, moved to L.A. and pursued his musical career there. Dan was replaced by Joe Amon and he would remain the bass player for the remaining history. ‘Guillotine Nightmare’ was a sort of their first hit single, as it was fans favorite in their live shows. After several concerts and many articles and reports for their live stage performance and high energy their fan base was going forward and also opened for Joe Perry project, Aldo Nova and Y&T. At this point they changed directions and Dave Hart became the lead vocalist and relinquished his guitar duties to Dave Ledrech who had been their roadie for the past year. This gave Steele an improved guitar duo to work with. Eventually Dave left the band and was replaced on guitar by Dave Balano. Unfortunately they never managed to get a proper offer from a big label despite the offers they got from small independent record companies. As the contract from a major label never came, after 6 years Steele finally went their separate ways to pursue other musical projects. Dave Balano went on to form Vain. Jim Lang went on to be part of Vicious Rumors and X-Men. While Dave Hart went on to form Savoir Faire. A strong release with guitar based sound, well written songs, decent high pitched vocals and an energetic 80’s feeling. This limited edition CD of 300 hand numbered copies contains all their demo songs, recorded from 1983 to 1985, in a total of 14 songs. It encloses a 12-page booklet with song lyrics, band biography and rare photos of the band. All tracks are remastered by Bart Gabriel (Cirith Ungol, Sortilege, Pagan Altar).