I have expressed my appreciation towards the Polish scene quite a few times, to the point where the Polish Ministry of Culture should offer me insurance stamps. But, can I tell you something? I am not to blame if Poland is a land blessed by the musical gods, alright mates? So, in my propaganda for the Polish music exports, this time I’ll talk a bit about Sunnata, a Stoner – Sludge – Fuzz band; however it goes far more than that. Let me explain:

With their third full length album, Sunnata prove that ultimately, musical creation is not just a way to spend your time but is another and maybe even a totally identical term of “recreation”. Inside the ethereal atmosphere created in “Outlands,” our inner world is vibrated by a heavy fuzz ritual that intensifies its energy by grunge touches and desert rock. Well, that’s on just the surface. Because if you let the album roll over a dozen times in the week, you understand that Sunnata ultimately relies on Psychedelic Doom incorporating oriental vibes (like the Indian raga) and exotic dark elements that eventually lead to an extremely special result that no one else (at least in my ears) has as well achieved, so the band at hand offers a unique musical twist that evolves the given sound. If the following view is not considered heretical, I would say that Sunnata is a combination of Yob and Alice In Chains (the uncanny resemblance with Layne’s vocals can be understood by almost everybosy), while the complexity of Sunnata’s structures, which offer relaxation and brig on edge simultaneously, remind me of Tool. Expressive, atmospheric, with several distortions, droning effects, Indian rags and mellow vocal melodies that transit us from the materialistic world, to a world of spirituality, lucidity and tranquility.

The eight tracks of “Outlands” serve as a manifesto, according to which the attention to detail and perfection are the main characteristics of these Polish beasts. The sophisticated sound combined with Sunnata’s unique structures, the unsurpassed and flawless arrangements and the mystical character of these multi-dimensional songs, make “Outlands” a must-have.

“Outlands” was released in March 2018 by the band itself on CDs and vinyls, while the digital release of the album can be found just below. Recordings were made at Monochrom Studio, while mixing and master were handled by Haldor Grunberg at Satanic Studios. The cover artwork is a creation by Maciej Kamuda. 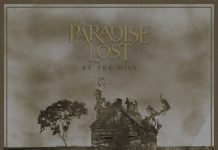