German thrash metal veterans TANKARD are currently at Gernhart Studio (Troisdorf) to work with producer Martin Buchwalter on the follow-up to the very successful “One Foot in the Grave” album. The upcoming studio album will be the soundtrack to the band’s 40th anniversary and is scheduled for release in September 2022 via Reaper Entertainment.

Frontman Gerre comments:
“Almost 5 years have passed since “One Foot in The Grave”!!! Madness, how time races, especially when you are already a bit more aged like us…. Hahaha!!!
All the more we are happy to work together with Martin Buchwalter in the Gernhart Studio again to record the next record, which should be released just in time for the 40th band anniversary, according to the motto: One foot out of the grave….”.

The title of the record is not yet revealed. More info coming soon – stay tuned.

Even though a lot has changed in the last three decades, one thing has remained the same: TANKARD are four metal maniacs from Frankfurt – authentic, loud and sometimes drunk. And it will probably stay that way for the next 40 years! 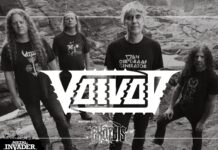