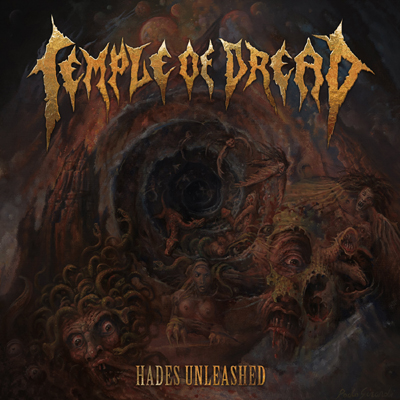 After the previous albums “Blood Craving Mantras” and “World Sacrifice”, which were highly acclaimed by critics and fans, TEMPLE OF DREAD complete their opening triple with the new hateful chunk “Hades Unleashed”!

The album will be released with nine brand-new songs on July 23rd, 2021 via Testimony Records. It was recorded and produced once again by band drummer Jörg Uken in his Soundlodge-Studio in Rhauderfehn, Germany.

A first track entitled “Wrath of the Gods (Furor Divinus)” has been premiered at these locations:

“Despite the two extremely strong previous albums, we managed to pack a few more bits on top! ‘Hades Unleashed’ definitely contains our strongest material so far”, says Markus Bünnemeyer, guitarist of the North German Death Metallers. “The album keeps what our name promises – even if we experiment more within the genre boundaries than on the previous albums. We have both clubbed the fastest songs of our career so far and slowed down the pace significantly on some of the other songs. All in all, the listener gets a fat piece of Old-School Death Metal, seasoned with a good portion of eighties thrash.”

The lyrics, once again written by band friend Frank Albers, deal conceptually with ancient, mainly Greek, myths. The congenial cover artwork was designed by the Italian artist Paolo Girardi and perfectly reflects the mood of the album.