What is the first thing that comes to mind when you hear the word tension? With this question, the Metal Invader Science Team conducted a survey, asking a group of random people. 53% of them answered that this specific word brings forth stressfull situations and emotionally intense moments, 19% thought of physics problems with pulleys, 11% went with hair extensions, 7% muscle pullings, 5% ”theories of armed concrete and geology”, 3% towing and/or climbing ropes and 2% had no thoughts whatsoever. Then we subjected our group to the listening of the album ”Wizard King”. Six months later we repeated the survey with the exact same question. This second time, a unanimous 100% of the group had this reaction to the word tension : ”KILLER BAND – KILLER SONG!!!”

Tension hail from Canada and they are truly a great band. Now you may be wondering why you have never heard of them before, despite their unquestionable quality, as proven by our 100% reliable survey and my very own accurate opinion. Well, my fellow reader, this band has been active from the late 70s (1977) till the early 80s and has been kept a well hidden secret among the circles of avid collectors, who would rather keep this guilty pleasure to themselves than share it with the rest of us poor peasants. To be fair, some of them have been slightly more generous and uploaded a few bits and bytes on youtube, but to find them you have to wade neck deep at the musical cesspool of the web. Enter Cult Metal Classics! Like the good teacher who has studied all the dregs and then filters and chooses to teach his students only pure knowledge, Cult Metal Classics has picked through the mishmash of the countless mediocre bands and wisely chose and brought forth the priceless Wizard King of Tension.

The album contains 14 pieces. The first 8 are in Tension Released, a rare release of 1980. (One of these was in a compilation of the best rock radio station of Montreal and is available, with some minor differences, twice). It also contains a piece from a 1978 demo and 4 more private recordings from 1979. Maybe these sound like minor details, but I am bringing them up on purpose to give you an idea of the sound, that has an oldfashioned touch characteristic to that era. Bound to be loved by all the old school rockheads/halfmetalheads out there.

The oldfashioned sound, the maturity in composition, the musical skills and the theatrical vocals altogether forge Tension’s special character. Their songs show love to their art, have changes that give them flair and in my opinion they all range from good to flawless. My favorite song, which by the way is a KILLER SONG, the galloping ”Tension”. Other favorites include ” Wizard King” and ” Simple Song”. There is nothing bad to criticize to this band, at least concerning their music. I admit their lyrics are not sophisticated, but on some parts they contain “deeper” meanings that surely your girlfriends will appreciate : ”Rockin’ you baby, show me what you’ve got, let me park my honey, honey, in your parking lot”… 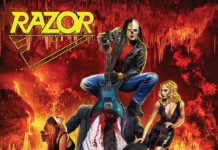